Completion of D1 in sight?

The cross-country highway connecting Bratislava with Košice will be complete in 2023 at the earliest. 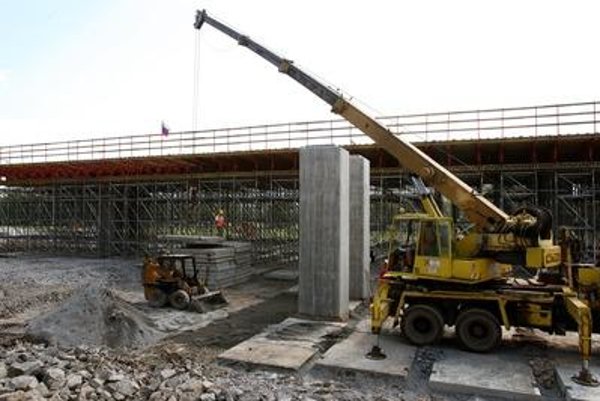 Amidst waiting for to official signing of the concessionaire agreement to design, build and operate the Bratislava ring road scheduled for May 20, the forecasting on when the D1 cross-country highway connecting Bratislava with the second biggest city of Košice might be complete goes on. Most still predict they year 2023 or even 2025 with the stretch between Turany and Hubová remaining the biggest holdup.

“We will put into operation the entire 450 kilometre long highway except for the 13-km stretch [between Turany and Hubová] which we have no chance to make [until the end of the current election term in 2020],” said Transport Minister Roman Brecely during a discussion programme of the Radio Express in early May.

The 13-km stretch between Turany and Hubová (between Vrútky and Ružomberok in north-eastern Slovakia) remains to be problematic due to geological conditions as well as financing. After a landslide near Šútovo in 2013 the state is reconsidering its final route, while the five kilometre Korbeľka tunnel is again in question too. Its construction would postpone completion of the highway far beyond 2020. Originally the surface route was planned to be complete in 2019. The variant with the tunnel will be also more expensive while this might mean an increase from about €500 million to €900 million, according to the Pravda daily.

In this area, the D1 goes here through some of the most geologically complicated territories of Europe, Ľubomír Palčák of the Research Institute of Transport (VÚD) told Pravda.

Assessing of individual variants and their impact on the environment should be complete next year and construction may start in 2018, while Brecely estimates that the tunnel variant as more probable.

Róbert Auxt, the head of the National Highway Company (NDS) estimated for the Hospodárske Noviny daily, that the Turany-Hubová might be completed in 2023.

“This is a more optimistic scenario where we do not expect further complications,” said Auxt.

Palčák also sees the year of 2023 as a term “on the edge” when financing of this stretch is not clear yet.

All the EU funds allocated for highway construction from the 2013-2020 programming period for Slovakia have been already distributed amongst current projects while there is still a possibility of some re-shuffles from other chapters. Another possibility is to use funds from the so-called Juncker package. The Slovak government is also pondering easing the debt brake in order it can obtain funds for completion of this stretch while another possibility is financing via a public-private partnership (PPP) project. In case of the latter the traffic intensity might be too low to make the PPP project feasible.

Only 10,000 vehicles drove on the road between Turany and Kraľovany on average per day, but as Palčák pointed out, the traffic intensity is only one of fundamental factors when deciding.

Another landslide near Ružomberok has also complicated construction of the adjacent 15 km Hubová-Ivachnová stretch. It should have been completed in 2017 but already now it is clear that this would be postponed until 2018 at least. Now a variant that the tunnel Čebrať originally planned to be two kilometres long will be roughly doubled is under consideration, Pravda reported.

During next four years three highway stretches between Žilina and Ružomberok that are currently under construction should be put into operation: 11.3 km Hričovské Podhradie-Lietavská Lúčka, 13.5 km Lietavská Lúčka-Višňové-Dubná Skala and 15.3 km Hubová-Ivachnová. By 2020 the south-western ring road of Prešov should also be complete.

But Ondrej Matej from the Institute for Transport and Economy warns that to have the D1 between Bratislava and Košice complete, firstly the second tube of the Branisko tunnel should be build. Preliminarily the National Highway Company plans to start these construction works in 2020 or later, the SITA newswire reported.

The National Highway Company opened on May 17 envelopes with price offers for last three highway stretches to be built from EU funds and co-financed from the state budget. The stretches concerned are the D1 of the Prešov ring road, the Budimír-Bidovce D1 stretch near Košice, both in eastern Slovakia and the D3 highway stretch in Kysuce in west-northern Slovakia.

Thus the situation when construction companies offered prices significantly below NDS estimate has not repeated.

“Construction companies, thanks to a large volume of orders in the construction sector, are choosing into which tenders they will enrol and are not willing to offer so low prices as in the past,” Jiří Vacek, head of the CEEC Research company told the Sme daily.

Now the NDS will assess the bids. If no objections are raised during the evaluation process, the winners of the tenders should be known by the end of May, according to NDS spokeswoman Eva Žgravčáková. After tenders are closed and contracts with winners signed, construction works should start later this year and be finished in 2019 and 2020, SITA wrote.

“If we continue to build highways at the current pace [of about 11 kilometres per year] and it will not increase, the primary highway network would be completed sometime in 2040,” Auxt of the NDS told Hospodárske Noviny, adding that this includes also completion of the D1 highway up to the Ukrainian border.

As a prediction of when the whole network, meaning all highways and dual carriageways, might be ready Auxt indicated the year of 2100. But Palčák thinks that in case of very good economic development, this may be much shorter while everything depends on the ability of the government to obtain financing and political support for the projects. Palčák estimates that currently Slovakia has completed 60 percent of its highway network and a bit more than 20 percent of the planned dual carriageways network.