Behind bars but looking for regular work

Prisoners are obliged to work, but finding jobs proves to be a challenge. 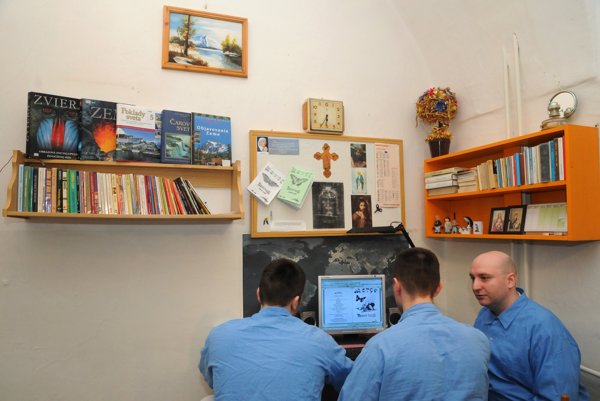 A wardrobe, a pair of trainers, or wooden spoons. People are rarely aware that something they use on a daily basis might have been produced behind prison walls. Most people do not know that prisoners have the duty to work while serving time, even the hardest prisoners have to sew shoes, wrap glass or build furniture.

Even as they serve time prisoners must pay alimony or taxes. Through work they can earn around €100 per month. While this may not sound like a lot, most companies offer some bonuses.

“The employment of prisoners is important so that they don’t lose work habits and despite the fact they find themselves on the margins of society they perceive that their work has value,” said Ivana Molnárová, executive director of Profesia, a job portal.

Although prisoners say they are willing to work, there are often not enough jobs for all of them and many companies are reluctant to employ them.

Most inmates in Slovak prisons usually work between 7:00 and 15:00 if work is available.

“The basic obligation of a convict during the execution of a custodial sentence is to work if the prisoner is so assigned,” said Michal Hrnčiar, head of the Sučany prison. Each prisoner has a treatment programme designed for them and a work assignment is usually part of it.

In this respect, equality applies, and those convicts who were hardly familiar with menial work before they landed in prison and whose crimes and trials have been widely reported in the media, must work just like everyone else.

Slovakia’s bloodiest criminal, mass murderer Ondrej Rigo, is now a prisoner for life in Leopoldov. After committing nine murders in the early 1990s, he now sews shoes. Juraj Ondrejčák, the head of the prominent Bratislava-based Piťovci gang, does the same job in Ilava. The once feared boss of the Banská Bystrica underworld, Mikuláš Černák, now in prison for life, is currently not working, the TASR newswire reported in 2015.

Prisons often cooperate with outside companies and prisoners work for them. Some of them go out to work on construction sites for external companies. While at work, they have to be under constant supervision, reported the Ružomberok-based Grenstave company that uses prisoners as part of its labour force.

Grenstave has six or seven prisoners doing construction jobs for them but the prisoners are not employed directly by the company. Instead they are employees of the prison and earn salaries between €0.89 and €1.86 per hour. The final sum depends on their years of work experience or the specific occupation.

The average salary of prisoners in Slovakia is €101.31 per month according to the Prison and Justice Guard Corps (ZVJS). This is just a fraction of the average monthly wage in the national economy, which stood at €883 in 2015 based on the data from the Statistics Office.

When companies are satisfied with the job the prisoners working for them are doing in the long run, they can decide to reward them with “natural pleasures”, but it has to be after consultation with the prison director and it has to be in accordance with applicable internal regulations, added Hrnčiar. These extra bonuses usually come in the form of tobacco or food.

At the end of 2015, there were 1,346 accused and 8,567 convicted inmates in Slovakia’s prisons. Only about 70 percent of the prisoners behind bars have a job.

Though prison officials hope to increase this number, this might be easier said than done because businesses are rarely enthusiastic about employing convicted criminals, Jozef Tkáč from the prison in Prešov told the Život magazine.

Work for prisoners however does not necessarily depend on the interest of companies. In the southern-Slovak town of Želiezovce, for instance, locals are used to ordering furniture directly from the prison, made by the inmates, the Hospodárske Noviny daily reported. The prison reportedly handles about 30 such orders every month.

Currently, Slovakia’s prisoners work for about 150 entrepreneurs and some 20 state institutions, Hospodárske Noviny reported in April 2016.

However, maintaining or building work habits is not the only reason why prisoners are encouraged to work while serving time. By earning some money on a job, they also contribute to covering the costs of their stay in prison, as well as the alimentation costs or other fees they might be obliged to pay during their stay in prison. For prisoners who do not work, all those costs are covered from the state budget.

Working is only one way to personal development. Prisoners who show interest in re-qualifying or improving their qualifications, are entitled by law to education and training during their prison stay.

The general director of ZVJS, Milan Ivan, says that a prisoner with some skills can apply for education and based on individual abilities and capabilities ZVJS allows them to complete their compulsory education, high school or some training courses to increase or extend their qualifications.

Education is provided by the prison based on a contract with relevant educational organisations. Graduation has to be officially recognised and the graduates are issued the relevant document by an accredited institution. The graduation certificate cannot reveal that it was acquired while in custody.

If the prison does not have its own training centre, the Directorate General can allow its inmates to be trained outside the prison, if the respective security criteria are fulfilled. The Act on Prison Sentence allows transportation of a convict to a jail where education takes place, but the other facility must have the same degree of protection.

Statistics of the ZVJS show that last year 496 prisoner were enrolled in education, 33 of whom were adolescents. The institutions organised 1,085 different educational activities, attended a total of 12,818 times.

Most of those prisoners, 316, last year studied at a vocational school, ZVJS official statistics show. Another 173 persons went through a re-qualification course: 27 men re-qualified as gardeners, 88 men and 15 women re-qualified as cooks, and 28 men passed the welding course, while 15 inmates attended an IT course. Of other courses, 70 men passed the course “Everyday Law”, according to ZVJS.

For this sort of courses, non-governmental organisations are usually involved. Through their courses they mainly help prisoners enhance their legal awareness, gain some basic knowledge of effective communication and acquire skills that can help them in finding a place on the labour market after they are released from prison.

Prisons usually offer illiterate inmates a basic literacy course, which was attended by 71 prisoners last year, according to ZVJS.
“If the prison has such a course they are obliged to regularly participate in it,” Ivan said.

Disclaimer: The articles included in the “Human resources” supplement were created by authors enrolled in the educational programme organised by The Slovak Spectator in cooperation with the University of Economics in Bratislava. The programme seeks to train journalism students on how to cover business- and economy-related issues. The articles were prepared in line with strict journalistic ethical and reporting standards.