Born in Slovakia, then working in Czechoslovakia and Germany, Herz recently published his memoir Autopsy. The Sme daily addressed Herz in connection with his book, which he recently presented in Bratislava. 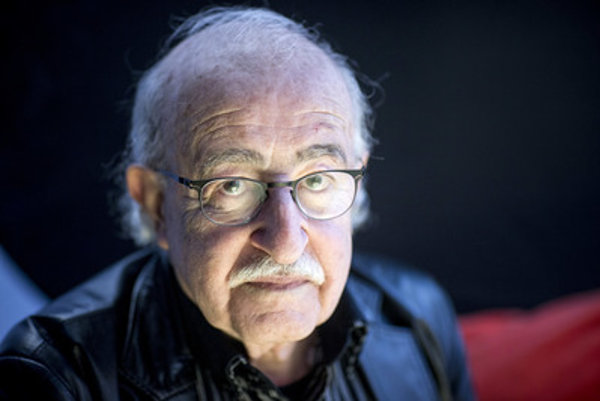 Herz has directed for film and television; including episodes of a joint French-Czech television series based on the Maigret novels of Georges Simenon. Among his movies, the 1971 film Petrolejové lampy / Gasoline Lanterns, was entered into the 1972 Cannes Film Festival and the 1976 film Den pro mou lásku / The Day for My Love was entered into the 27th Berlin International Film Festival. His most recent film is Habermann (2010).

Sme: In your book, did you want to return to some intimate moments of your life?

Juraj Herz (JH): I write in the very beginning of the book that I left out some events. In fact, I didn’t want to write it at all, but my good friend Honz Drbohlav with whom I made my previous film persuaded me. It took two-and-a-half years. He sat opposite me and I dictated him on the voice recorder.

Sme: What was it that you left out?

JH: Some parts seemed too intimate to me. This concerned mostly, or rather only, women. Although women represented a huge part of my life, one cannot find much about them in the book. I was sorry to separate them from the rest, but I couldn’t do otherwise. Specific names and situations would have to appear in the book – and I didn’t want that.

Sme: As a child, you were in a concentration camp. Was this motif difficult to come back to?

JH: What is difficult about it is that i have always wanted to make a film about it, but they didn’t let me do it the way I wanted; as a black comedy from the point of view of a boy 10 years old. The way I experienced it. I longed to capture exactly that atmosphere. This is still the most important for me.

Sme: How would it look?

JH: There were several dozens of us, boys: 60 Roma, 20 Slovaks, two French and one Pole. Somehow, we made friends. The Roma boys were in a women’s camp before and they told us that the Roma women used them as men. So we learned from them about things we had no idea about: with a great joy, they explained to us, inexperienced, how to make it and how it feels. This was a huge issue with us, and it has black humour in it. But we were also through situations which were rather black than humorous.

Sme: Was it how you felt it even back then?

JH: We could not live through it in grieving and sadness. And we had to survive. Even after we returned. For example, I was not allowed to attend school for one more year – because I learned to “organise”, meaning to steal... from huge piles of beetroot in fields. We ate ourselves full of it; and since then, I am sick of it.

Sme: Could this be the point when your attention to blood and horror started?

JH: I cannot answer this. In fact, I don’t have a special relation to blood. I don’t fear it, but I don’t like horrors where buckets of blood are streaming. I like those where there is the feeling of fear, which impact people in making them scared and anxious.

Sme: Do you know such a feeling from your childhood?

JH: As a small child, I feared mosquitos terribly. Otherwise, I don’t remember ever being scared.

Sme: You got to concentration camp, although your Jewish family converted and got baptised. How to you feel about it now?

JH: You know, my father was an atheist, and my mum – under his influence – too. He didn’t care how I was baptised, if only it could save my life. So I became a Protestant out of my father’s will. But there is something different to it: we met the family of Evangelical priest who baptised me every day; four families played cards together, we were friends. That’s why my father told me: you are like them, I want you to go also through the Confirmation – which I underwent only after the concentration camp. But in my heart, I was in fact atheist, and with time, this belief only intensified.

Sme: Did priests not tell you there are in fact no atheists?

JH: No. Maybe they think so; but I am a deeply convinced atheist, and so atheists exist. I have a huge collection of books written by priests who left the Church and they are very strong. You can interpret atheism also through famous people, starting with Voltaire. There are hundreds of them. The 17th century was full of atheists.

Sme: Through ageing, collecting experience and making mistakes, people often arrive at religious beliefs. Why this has not happened to you?

JH: The older I am, the clearer I get. It is out of question to hastily rectify anything before dying.

JH: I had no idea that the end of totalitarian regime was so close. I was angry then, in the first place. I had done film which was banned; and the Madrid festival was the last straw. All filmmakers were concentrated in one hotel, we used to meet, and I was the only director from a communist country. When we went to have a drink I had to refuse – I didn’t have the money. I received 18 dollars for an 18 day stay. Then, it finally flashed out and I said to myself: I want to go where I want, live where I want to pay my drinks and food myself. So I left Czechoslovakia. The second reason was I got divorced then.

Sme: You settled in Germany; how did you build up your environment, your life there?

JH: I married a young girl. I was over 50 then; but I wanted to start a new life, which was fulfilled: we had a beautiful daughter and were together for almost 25 years. Then we split, now I have a woman 30 years younger, and we have lived together a splendid life for seven years. There are things which go well. And I returned to the Czech Republic, I wanted it.

Sme: Are you at peace with what you have said with your films?

JH: There were long years when I could not shoot what I wanted, and I only shot for the sake of shooting. But I simply did not want to live without film like Ewald Schorm who did not make films for years. I was constantly looking for a way which would not be political, so I finally got to Slovakia and made a comedy which would otherwise never occur to me.

Sme: What gives you pleasure now?

JH: I cannot say what gives me pleasure: rather, I am sorry that I am getting old and I feel it. I have pain in my back, in my arms, I am not as fit as I would love to be – for 50 more years. I wonder when is the right moment to make an end.

Sme: To your work?

JH: No, to yourself. I don’t want to be a burden for anyone.

Sme: And what is your preferred conclusion?

JH: My conclusion is that I will prepare it for myself. And that I have the right to do so.