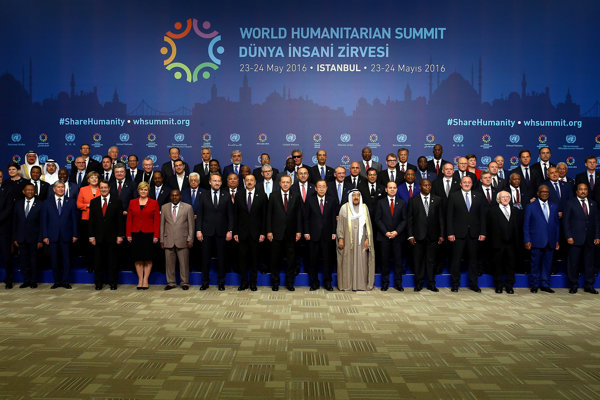 A group of world leaders and representatives pose for a photograph at the World Humanitarian Summit in Istanbul. President Kiska is the fifth from the right in the second row from below. (Source: AP/TASR)
Font size:A-|A+

Slovak President Andrej Kiska at the first World Humanitarian Summit in Istanbul on May 23 presented plans of Slovakia to double its humanitarian assistance as of 2017.

“We made a decision to double the financial resources for humanitarian aid several days ago,” said Kiska as cited by the TASR newswire, emphasising that there is no nobler and more important thing than helping others.

Slovakia allocates only small amounts for humanitarian assistance in the long term, totaling €2.25 million in 2015 even after an increase due to migration crisis.

Kiska in his speech also appreciated the work of Slovak missionary Veronika Terézia Racková, who was shot and died of her injuries in South Sudan last week.

“There are people and politicians in the wealthy parts of the world who claim that we have enough of our own problems and that everyone should care about himself first and foremost,” said Kiska. “Others consider helping those in need to be their moral obligation, even to risk their own lives in doing so. Veronika was one of those that considered helping others to be not only her moral duty but also her purpose in life.”

Kiska called on all governments and heads of states to boost the protection of humanitarian workers and to respect their work and lives.