FIDELIO, the only opera written by Beethoven, does not belong among the “musts” of opera houses but it is an interesting part of repertories of most of them. To the Slovak National Theatre (SND), it returns after decades – and with some controversy. 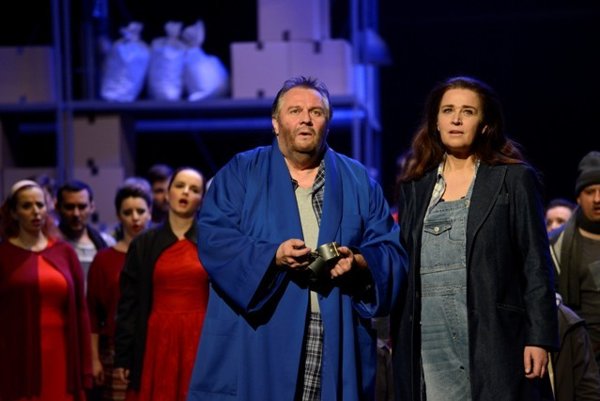 The SND turned to guests – not just in directing (Martin Bendik) and conducting (Hungarian Janos Kovacs) but also for the cast. The main characters are played by German Maida Hundeling and Jan Vacík. They have no alternation which is quite an unusual feature in current dramaturgy.

The head of SND’s opera section Slavomír Jakubek alluded to the fact that “this is not a brilliant operatic work written easily and lightly; but at the same time it is a work of a genius who spent ten years composing and re-writing it and it is, and should be, staged in crucial points of when we want to comment on the specific political or social situation, to take up its extraordinary humanistic, human and also philosophical message” – which was the main motif of the composer.  Jakubek added that the opera has its 1805 version (when it was first premiered), an 1806 version and the 1814 version which has been the basis for the SND staging. “With this opera, Beethoven fought not only for his artistic ideals and philosophical message but also for the very existence of German opera,” the director said.

The piece was premiered on April 8 and then re-run on April 10, while sparking some controversy among reviewers from the very beginning. Some, e.g. Pavel Unger in the Pravda daily, slam the director’s concept as abandoning Beethoven’s original moral ethos and replacing it with a plebeian feast, while also criticising the musical perception. Others, like Vladimír Zvara of the Denník N daily, praise it as a “primary and exciting work… If there were more works like this, our opera would be less of a weird museum for opera conservatives and more of a modern art for people, now”. Still others, like Michal Havran for the Sme daily, or Michaela Mojžišová for the Týždeň weekly, admit that the resulting work has its ups and downs and its main merit is to provoke: thoughts, debates, reviews, musical taste, and to challenge customary practices and expectations.

Apart from Hundeling as Leonora, the loyal and energetic wife, and Vacík as her imprisoned husband Florestan (they are a married couple also in real life, and Vacík praised the rare opportunity to act together), other cast members come from the SND: František Ďuriač, Boris Prýgl, Ján Ďurčo (also without alternation), Jozef Benci, Jiří Sulženko, Jana Bernáthová, Mária Rychlová, Ľudovít Ludha, Róbert Remeselník, Martin Klempár, Jiří Zouhar, Roman Krško and Martin Smolnický. Apart from Kovács, the other conductor is Peter Valentovič. However, especially the parts of Leonore and Florestan are perceived as very demanding from the vocal point of view, although Beethoven was known for not making it easy for opera singers.

The Bratislava performance is in German (unlike the previous versions in Slovak) and will be re-run on May 28, June 17 and then throughout the 2016/2017 theatre season. 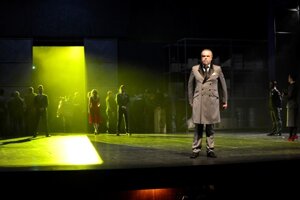 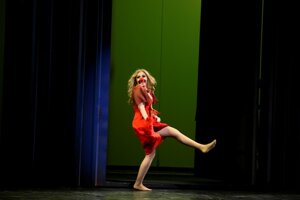 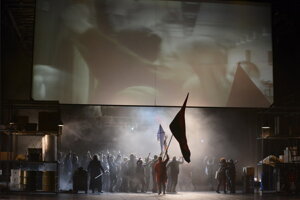 Fidelio is undoubtedly different from what is perceived as grand opera (not too many victims dying dramatic deaths, no ancient set, no historical costumes or props), and the recent staging stresses the modern means and technologies, minimalism and the rather universal stage and costumes that do not bring audiences to a specific historical period. If anything, they resemble more of the modern-time struggle of the proletariat, or maybe the even more recent struggle against the “dictatorship of the proletariat”. Essentially this struggle becomes universal: both good and evil are quite evident and clear to be recognised as such. What sends shivers down the viewer’s spine is the Bendik’s idea of a “happy ending”: underlined by cheering folks, the “evil” governor, former ruler, seals a pact with the incoming ruler, leaving everyone concerned about the future.

And this is where the issue of timing and the dramaturgical decision re-surface with a pressing idea: Fidelio was played for the re-opening of the Vienna Opera in 1955 (as dearly recalled by some of the Austrians in the audience in Bratislava) but also in Dresden in 1989, when it coincided with the anti-communist revolution and the theatre-makers’ revolt spilled onto the streets of the eastern-German city. In Slovakia, this piece hailing freedom, the fight against tyrants and the loyalty that can beat – with a bit of luck and help – conspiracies and all odds was performed also in the 1970s, with an input text in Slovak by dissident writer Dominik Tatarka. What is going to happen – or is happening now – that initiated the staging of this provoking opera? What social undercurrents are calling for it to be shown?