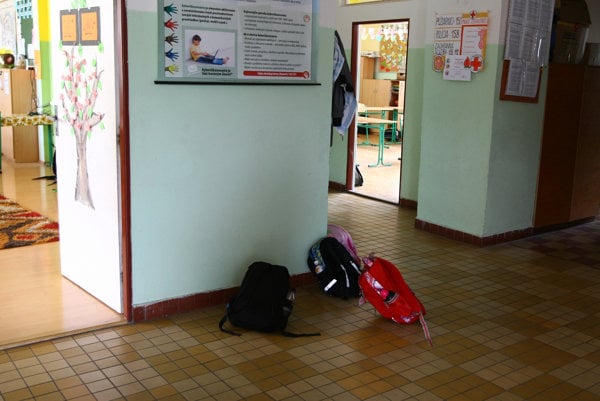 A case of a boy taken from his school started a heated debate. (Source: SME)
Font size:A-|A+

The video shows a boy from the primary school in Brehy, Banská Bystrica Region, screaming that he does not want to leave as a court employee removes him by force.

After activist Monika Kozelová posted it online, a discussion has emerged about how to best enforce such court orders in the future.
“[The incident] finally showed what value a child has in the judicial and social system,” social advisor and former head of the labour office in Bratislava Ida Želinská told The Slovak Spectator. “They are only an object about whom the decision is made, whose voice is drowned out and whose representatives only stand by watching.”

Children’s rights advocates agree that the video revealed the flaws in the system, and politicians have taken note too.

It is, however, not the first time something similar has occurred. The courts issued together 615 rulings in cases concerning taking minors from their custodians in 2015, but it is not clear how many of them have actually been carried out, the Sme daily reported.
Several politicians and experts in social custody confirm they know about other cases when a child was forcibly taken from their parents or families, without them knowing what is going on.

The case from Brehy pointed to the fact that the current rules are not very specific. They only offer general instructions on how to deal with the cases, said Ingrid Vrkočová, chair of the judicial trade unions and employee of the court in Piešťany.

“The employees who enforced the rulings have not been specially trained, even though the cases of minors are very sensitive and can have traumatic and stressful impacts on all participating parties,” Vrkočová told The Slovak Spectator.

Everybody should realise that the court enforced custody orders will never be ideal, even if the court employees will try to be as sensitive as possible. The child perceives the situation in a way that they are taken by someone strange, even if it is in their best interest, she added.

Moreover, the incident showed it is necessary for children to have their own lawyers, as well as to educate professionals about the legal protection of children’s rights, like their right to receive information about their situation, the right to express their opinion and to have their opinion respected, says Dana Rušinová, chair of the Coalition for Children and administrator of the Foundation for Children in Slovakia.

“This case also pointed to the important systemic aspect: the quality of preparation of professionals, their selection, motivation and evaluation,” Rušinová told The Slovak Spectator.