This relationship began before I took the position, and it will continue afterwards, says Slovak Philharmonic (SF) Chief Conductor Emmanuel Villaume, who is leaving after seven years. 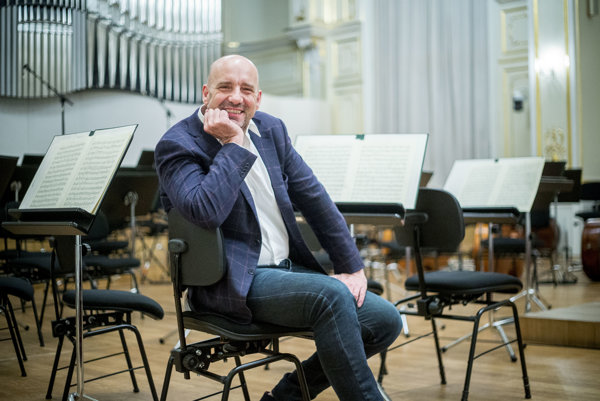 Shortly before giving his last concerts, Villaume talked to The Slovak Spectator about his experience with the ensemble and audiences, the ups and downs of recent years and his plans for the future.

The Slovak Spectator(TSS): What were your expectations and were they fulfilled?

Emmanuel Villaume: The first thing I was looking for was making music in an environment where music would be the priority; and with people who wanted to make music with me. This has been absolutely fulfilled, both with the orchestra and the chorus; and from my point of view, the relationship is as strong, if not stronger musically than when I accepted the position – which is quite rare in our world.

It is like with politicians: leadership gets tired after some time, or people get tired with the leadership after some time. The popularity of a music director or a chief conductor usually decreases after a honeymoon period. We definitely had better moments and others; but in the music hall, the artistic relationship with the orchestra has always been excellent.

I always say that artistic director of an institution – at least a one like an orchestra – should not stay too long. The art institution needs renewal, new blood, new ideas. There are a few exceptions to this, which is then a lifetime relationship; but even for Karajan, the last years with the Berlin Philharmonic were very difficult and very sad.

TSS: What are your feelings when looking back?

EV: There are two parts and they both grow in the time, and I think both the orchestra and me benefitted greatly from this. I am definitely a different conductor today than I was seven years ago, and it is also thanks to the fact that I was chief conductor in Bratislava. I was always more interested in the dramatic and spiritual dimension of the music, and less in details. I hope I did not lose the spiritual dimension; but I am probably more detail-oriented than I used to be. I also decided to concentrate more on technique. But it could be said that I conduct less and less – through body movements – but I channel more and communicate music.

One of my ambitions on arrival was to enlarge my repertoire and to work with a group which not just be a flirt and then to go work someplace else; but that it would rather be deep work over years. It seems we have achieved that, capitalising on some of the orchestra’s qualities and improving some areas where there was a possibility for this. 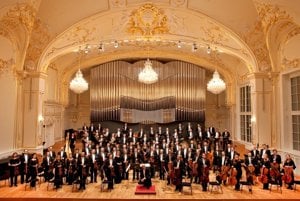 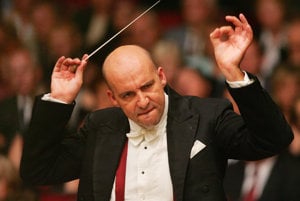 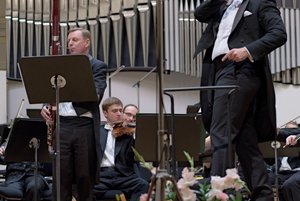 For me, it was appealing that we have here amazing chorus; and working with them every year was amazing plus. Maybe I am leaving too early – I hope people are saying that, instead of saying I am leaving too late, I should have left two or three years ago. Seven years is a life cycle – it is said life goes in seven year cycles – and it has been a happy one.

Moreover, I will be back, regular concerts are already planned. I care about the institution and about the players and singers. So I know this is a relationship that had started before I was chief conductor, and it will continue after I leave.

A second reason, connected with the first, is that my career is ever more and more taxing on my schedule. My current arrangement with Dallas, my guest conducting with Prague Philharmonia (PKF) which is a totally different entity with a different repertoire and different requirements on a music director, are a part of this decision. I make fewer concerts in Prague, but more tours and more recording. So this fits better with the way my career is now organised; and rather than leaving a Slovak orchestra for a Czech one, I would say I am leaving a symphonic orchestra for a chamber one.

TSS: How would you compare your work with a symphonic orchestra and with an opera house?

EV: My work as a chief conductor of SF is different from my role in Dallas. Generally – as difficult as it is to manage and sustain a symphonic orchestra, it is slightly less complex than with an opera company. Opera is experiencing changes and a sort of crisis all over the world. With international standards and the facility to travel and new economic models between opera houses, the best model is being discussed and sought. As a music director in Dallas, me and my colleagues also have to be inventive and to adapt the artistic and business model to new situations.

Here, I did not have responsibility for the full season; it was a very comfortable situation when I could concentrate mostly on music-making and in an environment where the pressure was only form myself to myself in terms of artistic achievements; and this is quite rare. In Dallas, I have strong responsibilities as a programmer, as one of directors of a full opera house with all the work and personal involvement that includes also fundraising, management, etc. But here, the orchestra understood my style and my personality based not on one week but on years of work.

TSS: Can you describe what you see as your contribution to the repertoire of the Slovak Philharmonic?

EV: We have had a Gustav Mahler cycle that will continue even after I leave, definitely the French repertoire, regular concerts with Beethoven and Mozart. I can say we regularly had good and satisfying concerts, and we often had moments of magic and intensity, Mahler’s Nine, Daphnis et Chloé, La Mer. Every time there was a chorus was special for me.

TSS: Were there any crises or bad moments?

EV: Being in the Slovak National Theatre (during the renovation of SF building, Reduta) was not the happiest time. It is a great venue for opera but it was a difficult venue for us. On the other hand, it gave us opportunity to work on certain topics, certain things that we could not work on here, in Reduta – as historical SND building has drier acoustics. As a musician, you are naked which obliged you to address certain issues which may be less obvious in a more reverberant acoustic environment.

TSS: You travel a lot. Where do you feel at home?

EV: Technically, my home is now Paris, California and Dallas; but I am almost never there. So home is where my friends are, where good music is. But in some moments I have no home and this is very painful and difficult. I used to travel always with a book which was a prestigious collection of French poetry in a thousand pages, put together by Andre Gide. For a very long time, that felt home. That is a spiritual-artistic-personal connection – that is how I define home.

Home is also ambience, smell, a cultural gesture, which collects in artistic and spiritual places – and you sometimes have them and sometimes lose them. One way to be back home is to connect through heart in a spiritual way. However, a language can also be home – for me that is English and even more French. And I also feel at home in the essence of Mahler, or Mozart, because I feel close to that man – as infinitely bigger as he is – because I know him from his works, his wit, his life. That feels like a conversation with someone I feel close to.  That brings a feeling of friendship, of home, of Heimat. Home is where you are put together, and these things and these people put me together.