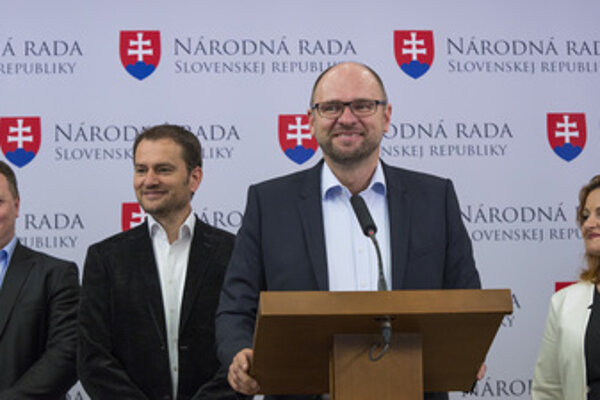 The Council, launched during a press conference on May 27, aims to boost cooperation among the opposition so that after the next general election these parties are prepared to be a government coalition.

“It has happened that SaS and OĽaNO-NOVA have become the strongest opposition caucuses with 40 MPs altogether,” SaS chairman Richard Sulík said, as quoted by the TASR newswire. “We’ve known one another for years. We’re the most experienced parties on the other side of the political spectrum.”

Indubitably, neither of these parties is under the influence of oligarchs and patrons, said Sulík. "We do politics in an honest way, but we aren’t flawless,” he admitted. The opposition council will convene once every month and, in special circumstances, at the request of one of the caucus leaders immediately, according to him.

Many people were engrossed by hopelessness after the 2016 general election, OĽaNO-NOVA’s leader Igor Matovič noted. “These people need hope and they want to believe that the “rule of oligarchs” won’t last forever. If we want to be a responsible opposition, we need to take this step,” explained Matovič who first entered parliament under the SaS banner in 2010 but left shortly thereafter.

Sulík declared that the Opposition Council is not an alternative to a shadow government but an assumption vis-à-vis further cooperation. Other opposition parties will not be members of the council at this point. “However, it doesn’t mean we’ve excluded the others but that this is the foundation,” said Sulík, adding that the far-right Kotleba-People’s Party Our Slovakia (ĽSNS) will never be invited to join the Council.

Matovič said that Boris Kollár-We Are Family party was set up shortly before the general election. “Our relationship has yet to take shape,” he added.

The agreement stipulates that both parties will inform one another about their proposals for new laws to be submitted to parliament, act jointly when initiating extraordinary parliamentary sessions and coordinate their outputs for the media.