A clown under the castle

In the past, the most frequently photographed object in Bratislava was the castle. Its pictures taken from the Petržalka side of the Danube river are well-known but those made from the other side, from the Small Carpathians, are slightly more rare. 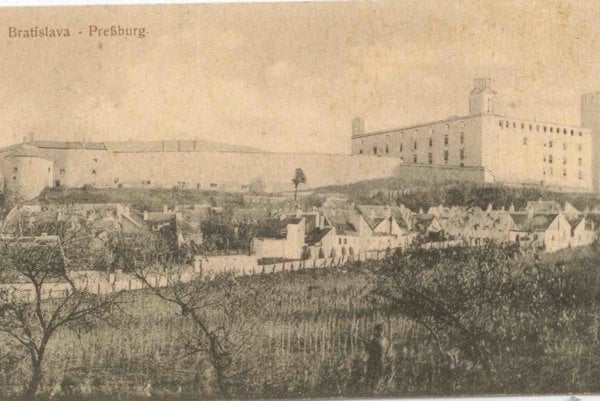 Thanks to the latter view, vineyards made it to the photo occasionally, which most of the time escaped the notice of period photographers. Thus, this picturesque vineyard ended up on the postcard from around the World War I more or less by chance. It is probably a vineyard patch mentioned already in 1418. It had an interesting name, Gumalyerer, which meant something like a jester or a clown in mediaeval German.

Between the vineyard and the castle, the Imperial Street – today’s Mudroňova – used to extend. It got its name after Hungarian kings (some of whom were also Emperors) started their hunts into surrounding woods from here. To get a better idea of the size of mediaeval town, it is good to remember that this road then used to run on the very borders of town lands, between vineyards and forests. In its close vicinity, the toll line and protective walls sued to lie.

It is interesting that as late as in 1880, only 13 houses stood here, as these places were deemed marginal and distant by town inhabitants. But already by the 1930s, the situation changed radically and the surroundings of Mudroňova Street became a much-desired development locality: mostly those well-off tended to build their houses or villas. Due to the increased construction traffic, the road had to be re-built, and thus, it was widened and paved with cobble-stones.

A closer look reveals a hunter posing with a gun in the bottom part of the postcard.