The carmaker has produced more than 4.5 million vehicles of 13 different models and 6.8 million gearboxes. 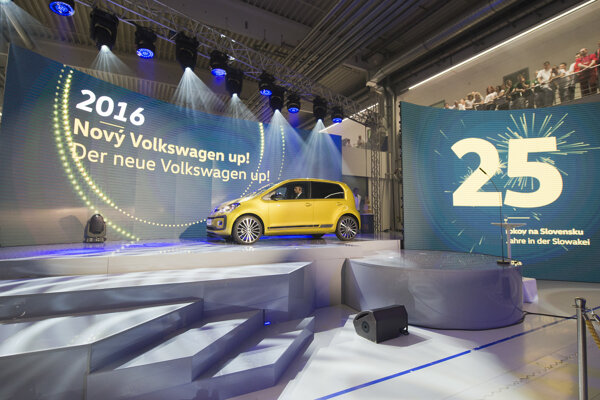 The largest carmaker in Slovakia celebrated its 25th anniversary on May 30. A special ceremony which was held at the Volkswagen Slovakia plant in Devínska Nová Ves which was attended also by Prime Minister Robert Fico.

During its history in Slovakia, the carmaker has produced more than 4.5 million vehicles of 13 different models and 6.8 million gearboxes.

The company has been growing and developing continually for 25 years, said Volkswagen Slovakia’s board of directors chairman Ralf Sacht. This fact can be confirmed by the growing number of employees as well as by the growing production every year, he added, as reported by the TASR newswire.

The company, which has become a reliable partner for the Volkswagen Group as well as for its customers, owes its success to thousands of committed, responsible and quality-oriented employees, Sacht continued.

Investments into the development of the Slovak plant have amounted to €3.4 billion. The company’s production in the future will be “effective, of good quality, flexible and customer oriented”, said Thomas Ulbrich, member of VW Slovakia board of directors for Production and Logistics.

“For this reason, we rely on VW Slovakia and Bratislava in the future and we’ll continue investing in the Bratislava plant,” Ulbrich added, as quoted by TASR.

Among VW Slovakia’s current priorities belongs the production of a new car model, Volkswagen up!, whose serial production has officially been launched during the May 30 ceremony.

Prime Minister Robert Fico praised the 25-year cooperation and underlined the importance of the company for the Slovak economy.

“Volkswagen Bratislava has a great impact on Slovakia and the Slovak industry,” said Fico, as quoted by TASR.

The auto industry represents the largest volume of annual GDP in Slovakia, he added.