The prosecutor’s office claims it did not solve the case five years ago because it did not receive criminal complaints.

The district prosecutor’s office in Bratislava will check the controversial loans to Slavia Capital company and also non-standard benefits for members of the Student Credit Fund (ŠPF) and Credit Fund for New Teachers (PFZP) at the time current Education Minister Peter Plavčan was sitting in their controlling bodies.

It received the order from the regional prosecutor’s office which finished reading the files. It admitted that the case was not properly investigated five years ago, the Sme daily reported.

The files reportedly contain suspicions of committing a crime when administering someone else’s property, said deputy prosecutor and spokesperson for the regional prosecutor’s office in Bratislava Oliver Janíček. 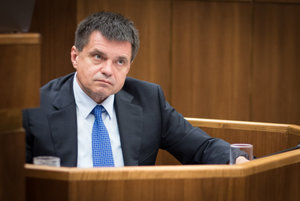 Sme pointed to the problematic behaviour of the previous management of the funds shortly before Plavčan was nominated for the post by the Slovak National Party (SNS). At the time of the investigation, the police and the prosecutor’s office checked only the problem when funds’ employees received bonuses despite the fact that the functions were only honorary and thus should have been unpaid. They did not deal with other suspicions, according to Sme.

The problems currently under investigation concern not only the loan amounting to €5.5 million to investment company Slavia Capital, for which Plavčan’s wife Viera was working. The prosecutor’s office also wants to investigate the payment for complete medical checks of 10 employees of the ŠPF and their families. The fund paid nearly €8,800 for the health treatments, from medical checks to cures, Sme wrote.

Plavčan, however, defends his actions, but failed to answer the question whether he will stay in the post if the prosecutor’s office confirms a violation of law, Sme reported.