Slovak association also submitted a protest letter to the French Embassy and the EC Representation Office in Bratislava. 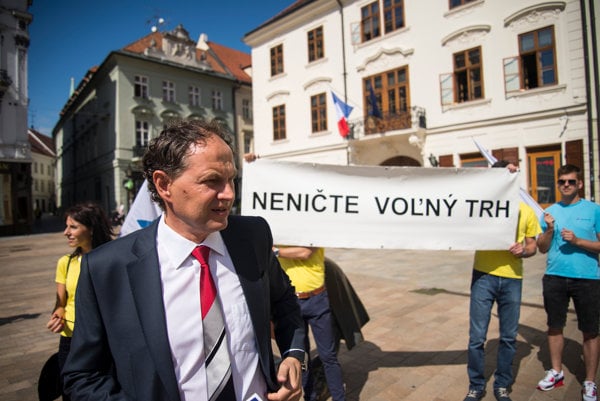 Ten European road haulier associations, including Slovakia’s ČESMAD, protested against new regulations in a planned French and already valid German law on the minimum wage May 30.

As part of the protest, president of ČESMAD Pavol Jančovič officially handed over a protest letter at the French Embassy in Slovakia and at the Representative Office of the European Commission in Slovakia, the TASR newswire reported.

“We came due to the law on the minimum wage that is set to come into force in France as of July 1,” Jančovič said, as quoted by TASR. “We find it to be too bureaucratic and difficult to put into practice. And we also think that it’s certainly not in line with European law or European principles.”

An even bigger issue seems to be the numerous administrative requirements connected with the new regulations, such as the submission of many documents and the hiring of a permanent company representative in France to handle all the transport company’s files, contracts and payroll slips.

“At the same time we think that the bill fundamentally violates EU principles, namely the free movement of goods, services and people,” Jančovič added, as quoted by TASR.

He could not say exactly how the new French legislation will increase carriers’ costs.

“Regarding salaries, these might increase by hundreds, even thousands of euros, but we also have to think about unknown parameters connected with a great deal of bureaucratic steps,” Jančovič added.

“We constantly have to report every single driver who transports goods in Germany,” ČESMAD’s president said. “We have to submit a terrible amount of documents and information to German offices on salaries and other, in my opinion, discrete data.”

He went on to say that this might well constitute a violation of the Slovak law on personal data protection. Via the new law France wants to combat social dumping, but according to Jančovič, this law is in reality a complete denial of the fundamental principles of the EU’s open market.

A total of 10 road haulier associations from Bulgaria, the Czech Republic, Estonia, Hungary, Lithuania, Poland, Portugal, Romania, Slovakia and Spain have prepared two open letters for French President Francois Hollande and European Commission President Jean-Claude Juncker. In the letters the associations demand that the law should be adjusted so that it will not include foreign transport companies, TASR wrote.