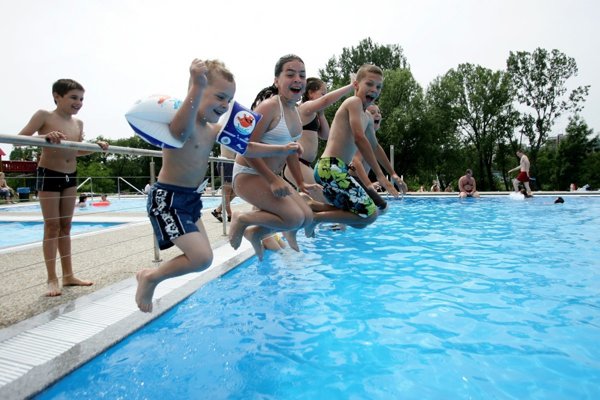 Several open-air pools in Bratislava started their bathing season during the last week of May as the temperature of the water was above 20 degrees Celsius. On Friday, May 27,  Rosnička, Lamač, Tehelné Pole and Delfín pools had already opened their doors while the season on  lake Zlaté Piesky started the very next day. The operator of open-air pools in Bratislava, STARz, gives information about the launch of the bathing season on its website.

Operators of individual pools reported visitor numbers in the tens during the weekend.

“This repeats every year; it lasts a while until people get used to coming,” said Roman Artim of the pool in Lamač as cited by the TASR newswire, adding that when asked about visitors on May 28 there were about 20-30 people.

At Tehelné Pole there were about 70-80 visitors, especially families with children. Operator Jozef Čižmár specified that about one half of the people were in the water and the others were sunbathing. He considered the visitor numbers as standard even though more people arrived during the first open weekend last year. The water temperature at Tehelné Pole was 21 degrees.

“We can heat the water; about 50 people have arrived,” said Školek, adding that the water temperature was between 24-25 degrees. “Considering that it is only May, it is a good visitor rate.”

Other summer pools in Bratislava will open during the following days: the pool in Krasňany on June 3 and the Rača pool on June 10.

The season on the lakes in Bratislava is starting too. Apart from Zlaté Piesky Bratislavans can bathe in Veľký Draždiak lake even though it is not an official bathing place. Other unofficial beaches are on Vajnory, Rusovce and Kuchajda lakes.