Though electronic payments are on the rise, the time for doing away with hard currency is a ways off. 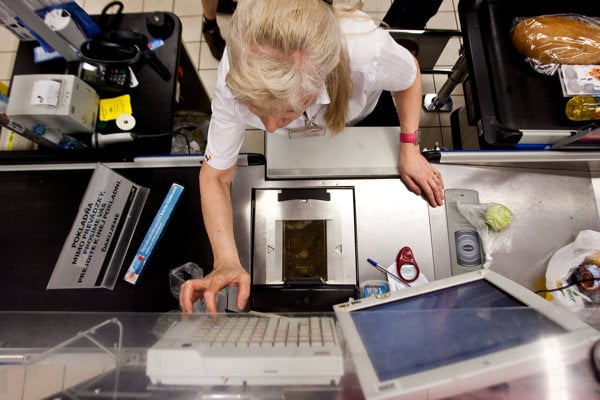 It is unlikely that cash will disappear altogether in the near future, but Slovaks – much like shoppers everywhere – look set to use it less and less.

Economic analysts and bank card companies point to the technological developments that bring even more advanced methods of cashless transactions and their popularity among the public. At the same time, they admit there are mental barriers to their use, including low financial literacy, as well as an insufficient network of cashless payment outlets.

Experts also point out that while a cashless economy may mean more transparency and better tax collection, it also risks a loss of privacy.

“By taking the entire financial life into a bank you are in practice losing full control over it,” Martin Vlachynský, analyst of the Institute for Economic and Social Studies (INESS) think tank, pointed out to the Denník N daily.

“The existence of cash is deeply rooted in people and they can imagine only with difficulties that there would be neither coins nor banknotes and that money would be virtual,” Lukeš told The Slovak Spectator, adding that while cash still prevails in Slovakia, the situation is changing and people pay cashless more and more often. “The increase in mobile payments can speed up the development, but it is still a question whether we are talking about decades or generations [until cash disappears].”

Towards a cashless economy

Scandinavian countries lead the transition toward a cashless economy, with hard currency accounting for just 20 percent of the total consumption as compared to three-quarters for the rest of the world, the card company Visa Europe cited statistics of Euromonitor International in its press release from February.

The average Dane pays electronically more than 350 times annually, which is about double the European average of 180 electronic payments. Slovakia averages about 90 electronic transactions per year per person, one of the lowest in the EU.

“Further development of the acceptance network might help Slovakia get closer to the European average,” wrote Marcel Gajdoš, director for Visa Europe for the Czech Republic and Slovakia, which promotes electronic commerce as a means of combating tax evasion.

The shadow economy in Slovakia swallowed more than €11 billion or 15 percent of GDP in 2013 based on The Shadow Economy in Europe report introduced by Visa Europe last year. In Austria it was 8 percent and in the Czech Republic it was 16 percent.

“The shadow economy is by its very nature the economy of cash that enables anonymous untraceable transactions,” wrote Gajdoš, adding that extension of the network enabling electronic payments by outlets at retail sale and small craftsmen where the risk of shadow financial transactions is possible, is a way to curb the shadow economy.

“If penetration of POS terminals reaches the level near 100 percent, we all could start thinking about it,” said Beňák. “But the unwillingness to cancel cash from the side of citizens because of what is still a high share of the grey economy is still strong.”

Maroš Ovčarik, analyst of financial products from Finančný Kompas, who supports usage of payment cards, sees several other barriers on the way to a complete transition to electronic payments including distrust and concern from abuse of bank cards or internet banking, fees for usage of these services and financial and internet literacy.

“We are far from the future when cash would disappear completely,” Ovčarik told The Slovak Spectator. “I base this on the fact that while we have payment cards or internet banking here in Slovakia for a long period of time, there are still very many people who do not use these services at all.”

Vlachynský points to fundamental risks to what people would be exposed if cash is scrapped.

“A simple mistake by a distrainor can send you into existential problems regardless of your income or reserves,” Vlachynský wrote for Denník N.

Moreover, in the cashless economy, money can become captive to the financial system when people are always exposed to the risk of a collapse of a bank or the banking system. In this vein Vlachynský cites recent problems that have occurred in Cyprus or Greece. People would also be unable to escape monetary experiments and Vlachynský also warns that any transaction can become subject to taxation. Another risk Vlachynský pointed out is the loss of privacy when he doubts whether data of private individuals would be safe from eyes of unauthorised persons, recalling doubts about how Prime Minister Robert Fico accessed the confidential tax information of Igor Matovič.

“Giving up cash means handing over one whole aspect of human life and social interaction into the hands of the financial system and politicians,” Vlachynský wrote.

Disclaimer: The articles included in the “Banking” supplement were created by authors enrolled in the educational programme organised by The Slovak Spectator in cooperation with the University of Economics in Bratislava. The programme seeks to train journalism students on how to cover business- and economy-related issues. The articles were prepared in line with strict journalistic ethical and reporting standards.