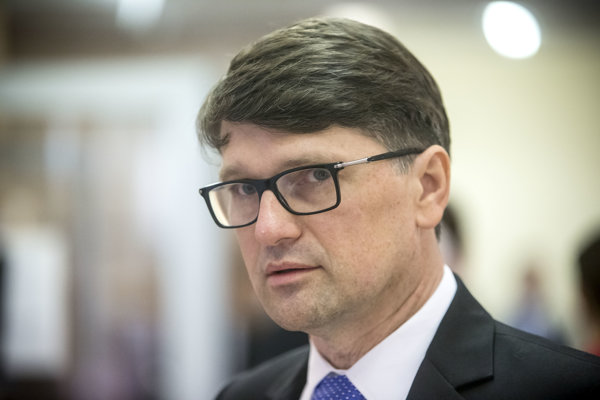 If a hike in licence fees for public service Radio and Television Slovakia (RTVS) fails to be pushed through in line with the current draft amendment, I’ll consider how to respond, including whether to remain in my post, Culture Minister Marek Madarič (Smer) said in response to the negative stance of the Slovak National Party, one of Smer’s coalition partner in government, to the proposal to almost double the fees.

Madarič will leave the draft bill on payment of licence fees to undergo interdepartmental review. He is willing to take constructive comments into account, but he is also ready to submit the draft to the cabinet even with potentially disagreeing comments.

In reaction to the result of Friday’s (June 3) Coalition Council session, Madarič admitted that he was surprised by the stance of the Slovak National Party (SNS), which refused to support the draft if the party’s conditions concerning the content of broadcasting aren’t met.

“I don’t understand the way in which SNS raised the problem via the media,” said Madarič. “I don’t grasp the content of its conditions, either, as some of them are formal, while others are vague or mistaken.”

Madarič pointed to a potential violation of the programme statement in this context. He said that the document includes a commitment to ensure adequate financing of RTVS by optimising payments for the public service without conditions that would have to be met before the adoption of a legislative measure. He added that the implementation of this commitment in the document was repeatedly approved, and so he does not comprehend the position of coalition parties that “de facto agreed with violating the programme statement”.

“If we pretend that the programme statement is holy, then nothing is holy after this precedent,” he said.

Madarič did not want to speculate about SNS’ motivation in not supporting the draft bill. He also refused to comment on whether it could concern a bid for a personnel change regarding the post of RTVS general director.

SNS has stated that RTVS must undergo significant internal reconstruction before a licence fee hike so that it can become a proper Slovak and national public service television service provider. In this context, SNS pointed to the news service as well as the style of language used by editors and presenters. SNS also criticised what it called a disproportional distribution of funds for audiovisual productions among individual studios and their centralisation in Bratislava.

The draft revision of the law on payment for the public service is currently undergoing interdepartmental review. The draft counts on an increase in licence fees for households from the current €4.64 per month to €7. The aim of this step is to enable RTVS to meet to a greater extent the tasks required of it by the law and expected by the public.