Three leave the We Are Family party

They will not enter the caucus of Sieť, as was speculated in some reports, for now. 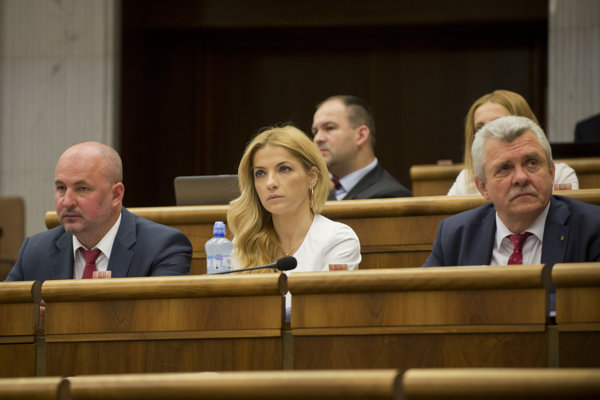 The opposition party We Are Family expelled three MPs – Martina Šimkovičová, Peter Marček and Rastislav Holúbek – from its deputy caucus for not actively contributing to the caucus’ work. The party has also called on Šimkovičová to give up her mandate, saying that she voted for another party’s member in May.

“The deputy caucus now has only eight members,” said Boris Kollár, chair of We Are Family, as quoted by the TASR newswire, explaining that the three usually do not attend the meetings of the party, which take place before the voting in the parliament and at which other MPs usually agree on how to vote.

Holúbek and Marček have also lost their membership in the party, while Šimkovičová never joined it. She, however, was asked to leave her MP post, with Kollár explaining that she voted for Holúbek in May which is prohibited by the parliamentary rules. Holúbek was reporting about the law, but forgot his card on his table. That was when Šimkovičová allegedly voted for him, TASR wrote.

A similar case occurred in 2009 when then-opposition MP Iveta Radičová voted for her colleague Tatiana Rosová. She later admitted the mistake and gave up her mandate.

Kollár also confirmed that the three MPs are discussing the possibility to join the coalition Sieť party. Its deputy chair Andrej Hrnčiar, however, told the Sme daily that he does not expect this will happen.

“Some of our MPs protested against it,” Hrnčiar added.