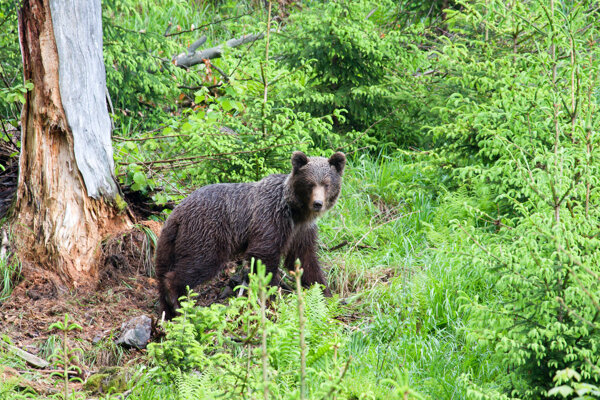 Many people from Western Europe think a collision with a bear is an exotic adventure because they are slowly dying out in Europe, with the last species in countries such as Slovakia, Romania and Ukraine, the Dnes24.sk website reported. The British media have recently supported this perception by describing the video of father and his daughter filmed from window of the clinic as a presentation of football skills.

“The cute footage showed the animal dribbling the ball with ease around the manicured lawns of the clinic,” wrote Daily Mail.

The website quoted Milan Parimbucha, the director of the clinic, that the bear had been going through the hospital park for some time to forage for food in the rubbish bins located a bit further on from the clinic. All the children were inside when the bear showed up, Parimbucha said, the Daily Mail reported.

The Daily Mail added that it is a fairly common scene in this region.

“According to local sources it is common for brown bears to visit towns and villages after the winter as they search for food,” Daily Mail wrote.

“There have been recent attempts by bears in the High Tatras to break into people’s houses,” reported BBC, as quoted by Dnes24.sk. “Police are advising locals to be especially cautious when going near waste containers after dark.”