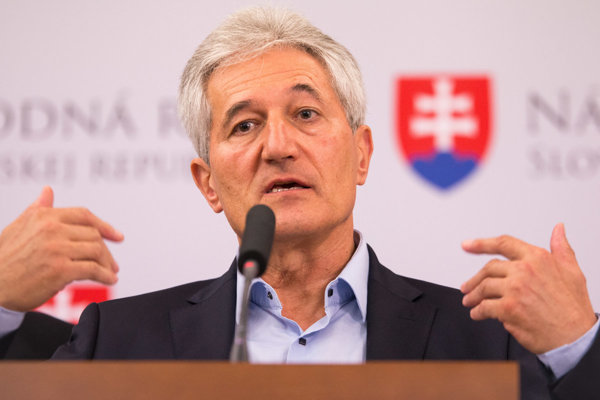 Alan Suchánek received the White Crow award in 2014, after he blew the whistle in the infamous CT case tied to overpriced hospital equipment. Suchánek is the first laureate to give up the award – over allegations of misconduct in a similar public procurement tender.

The decision came on the heels of Prime Minister Robert Fico publishing an open letter on his blog, in which he called on Suchánek, who has in the meantime been elected to parliament, to give up his mandate.

It turns out that it wasn’t the first attempt of the hospital to buy the CT device, and that Suchánek was involved in the first tender, back in 2012. That tender also ended in vain after the most expensive but not the best offer was selected to win – thanks to the evaluation of the commission that Suchánek was a member of.

The board of the White Crow award subsequently admitted they overlooked some facts in Suchánek’s history and that they wouldn’t have granted him the prize for whistleblowers if those facts were taken into consideration. Although they neither stripped Suchánek of the award nor called on him to give it back, he decided to return it June 13.

Suchánek was among the laureates of the 2014 edition of the award, after he reported on the intended overpriced purchase of a new CT device in the Piešťany hospital where he worked as surgeon. In the aftermath of the scandal, Pavol Paška, the one-time prominent Smer politician, stepped down as parliament speaker. The then health minister Zuzana Zvolenská and deputy parliament speaker and member of the hospital board Renáta Zmajkovičová also resigned over the CT scandal.

But the documentation of the first tender from 2012 shows that Suchánek was involved in a tender proceeding that he now calls a mistake.

When the CT order scandal broke out and caused a quake on the Slovak political scene, the then director of the Piešťany hospital, who stepped down over the scandal, Mária Domčeková, pointed to the fact that in 2012, in another procurement tender, Suchánek preferred the purchase of the most expensive but technologically insufficient CT device, she said in an interview with the Pravda daily in May 2015.

Prime Minister Robert Fico now echoed the allegations against Suchánek in his open letter, calling on him to step down as an MP. Following the call of the prime minister, the board of the White Crow award went back to check on the case that they admitted to have deliberately ignored before awarding Suchánek because they did not deem Domčeková a trustworthy source.

Now they found that in 2012 the hospital indeed did not set clear criteria for the tender, which allowed the Siemens company that offered the most expensive device to participate even thought the device was not what the hospital was looking for.

Instead, however, the commission unanimously forwarded the offer to the next stage of the process, the electronic auction. Siemens won the competition even though it offered a device €200,000 more expensive than the competitor who came second.

“The hospital in this competition definitely put Siemens at advantage and harmed the other participants in the tender,” the findings of the board read.

The hospital in the end did not purchase the device following personnel changes on the board of the hospital. The next tender, in 2014, also ended with an overpriced offer winning the competition, leading to corruption and cronyism allegations. The hospital is still using its old device now.

Both tenders are now subject of investigation by the National Criminal Agency, according to Denník N.

“If the board investigated the tender documentation in detail before awarding Alan Suchánek, he wouldn’t have been given the award,” the statement of the board reads. Although they considered taking the award away from him, in the end they decided not to do so.

The board also admitted that they were aware of the case against Suchánek in the time when they were deciding to award him, but did not check on the allegations against him, which in hindsight they call “a serious judgment flaw”. In light of that, the entire board stepped down and won’t be running for their posts again. The now ex-board members are Zuzana Wienk, Marián Leško, Milan Šagát, Milan Šimečka, Monika Smolková, Egon Gál, Michal Kaščák, and Emília Vášáryová, who did not participate in the decision making due to her serious health problems.

“The award was given to Alan Suchánek due to the failure of the board, and therefore he shouldn’t bear responsibility for this mistake,” the board wrote to explain why they opted not to take the award back.

Suchánek however stepped down on his own, “so that decent people in this society now or in the future don’t need to hurt themselves”, as he said. He he cannot determine whether he is guilty or not, but feels like he was part of a mistake that happened. He said he was proud to be the laureate of the award.

Nevertheless, Suchánek has no intention to give up his parliamentary mandate, as the prime minister called on him to do.

Former defence minister for Smer Martin Glváč said in that regard that the White Crow served to manipulate and deceive the public ahead of the elections this March.

While Suchánek rejected such claims, the fact is that he made it to the parliament on the slate of OĽaNO-Nova, which featured a number of “white crows”, including its top candidate, blogger Veronika Remišová. Even though they never stated the “white crow” on the billboards, Matovič has referred to the awards during the campaign, Zuzana Wienk admitted for Denník N.

“The White Crow has very unwittingly become subject of political fight,” Wienk told the daily and added that, on the other hand, this also shows that it has a serious and important status in society.

The organisers of the award are planning to take steps to protect the award from further politicisation in the future – by registering it as a protected trademark, Wienk told the daily.