Profits from pharmacy services will now go to the hospitals themselves and help combat revenue deficits. 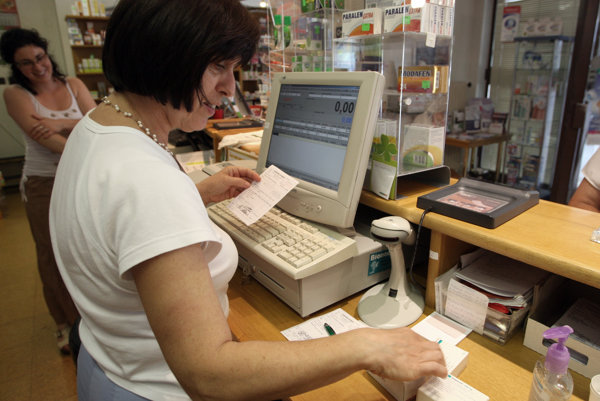 While looking for a cure for heavily indebted state hospitals, Health Minister Tomáš Drucker has targeted private pharmacies operating on hospitals’ premises. By channelling their profits into hospitals’ pockets the Health Ministry wants to improve budgets as it reexamines the efficiency of outsourcing of other hospitals’ activities too. Pharmacists warn that ousting of private pharmacies from hospitals may ruin honest pharmacists while health care experts perceive it as a first step in a needed series of steps and measures.

“The analysis of contractual rental relations in several hospitals indicated that they rent space meant for public pharmacies to private companies under conditions that are more convenient for private companies than for the hospitals themselves,” Health Ministry spokeswoman Stanislava Pondelová told The Slovak Spectator. “We want that especially hospitals themselves have financial benefit from operating pharmacies in hospitals.”

Health Minister Tomáš Drucker has issued an order, valid as of June 15, obliging hospitals and other health-care providers controlled by the Health Ministry to terminate rental contracts with private pharmacies if the agreements do not contains clauses about fines or penalties. It also bans hospitals and other health-care providers from extending rental agreements and orders hospitals to launch their own public pharmacies.

Mária Pourová, senior analyst with the health-care think tank Health Policy Institute (HPI) opines that the order does not solve the actual economic situation of state hospitals, what is the accumulated debt.

“Thus we perceive the directive as the first of a series of steps and measures needed to improve financial status and ensure sustainable management of state hospitals for the future,” Pourová told The Slovak Spectator.

Ondrej Sukeľ, head of the Slovak Chamber of Pharmacists (SLeK), considers the intention to make all activities in hospitals more transparent and centralise them as justified in cases when five different private networks operate five pharmacies in one hospital.

“On the other hand it is necessary to perceive sensitively and individually the situation when an individual pharmacist operates in good manners a concrete pharmacy,” Sukeľ said.

Igor Minarovič, board chairman of the Pharmaceutical Society (DL) sees Drucker’s order as a political decision mirroring the current times. He warns that this order would harm the competition on the market as doctors in hospitals may be pushed to direct their patients to buy medicines in pharmacies operating in hospitals.

“Pharmacies managed by hospitals will enjoy an unfair competitive advantage – they will not need to fight for favour of patient – and thus they will not be motivated to improve the quality of provided services,” Minarovič told The Slovak Spectator, adding that this order may bankrupt many pharmacists running their businesses near hospitals regardless of their tradition and quality.

Under the reform of the then health minister Rudolf Zajac hospitals outsourced 12 years ago several activities related to their operation like running of public pharmacies on the premises of hospitals, labs, diagnostics activities and others which are often profit-making.

The HPI sees efforts of any owner of hospitals to operate a pharmacy on their premises  as legitimate.

“Hospitals and their surgeries produce natural demand for pharmaceutical care; it is legitimate if the owner of the facility wants to re-channel the profit from this demand towards itself,” said Pourová.

On the other hand, contrary to a private pharmacist, operation of a public pharmacy is not a primary task of a hospital. Thus it is necessary to analyse advantages of such a change and the ability of state hospitals to operate the public pharmacies effectively, according to Pourová.

She does not expect that this change would impact quality of health care, but also this also does not solve in a fundamental way the current economic situation of state hospitals -- debt.

“Hospitals are unable to settle their obligation in time, they often settle invoices to suppliers only after hundreds of days,” said Pourová. “Who and for what prices will be willing to supply medicines to pharmacies in state hospitals in which the debt accumulated to €530 million by the end of 2015?”

F. D. Roosevelt Hospital in Banská Bystrica considers the Drucker’s order as justified as running a public pharmacy has a big importance for financial operation of hospitals. This hospital itself has been running its own public pharmacy since 2013. The pharmacy is in the black while its turnover exceeded €5.8 million last year, the Pravda daily wrote.

“The launching our own public pharmacy was an effort of the management to obtain additional financial resources into the hospital’s budget,” spokeswoman Ružena Maťašeje said, as quoted by Pravda.

But in Minarovič’s opinion, most important is the fact that the minister intends to address problems in the health sector only by economic measures and sees public pharmacies only as business units while modern pharmacy sector is a significant instrument in securing public health. In this respect he recalled a verdict of the European Court of Justice according to which a pharmacist as an owner of a pharmacy provides thanks to his education, experience and responsibility higher guarantees of quality pharmaceutical care than other owners of pharmacies.

“The order of the minister not only does not take into consideration this verdict but even literally denies it,” said Minarovič.

Minarovič said that the directive which affects only public pharmacies in a few dozen state-owned hospitals of all about 2,000 public pharmacies does not have significant impact on patients. The quality of provided services is not likely to change as pharmacies have in stock items which doctors prescribe and patients buy in free sale, said Igor Pramuk, vice-president of the Slovak Hospitals Association (ANS).

Pramuk sees Drucker’s order as a logical part of efforts to reduce deficits “even though I do not think that this is the decisive activity that will make the [wanted] significant difference”.

Pharmacist associations point out that there are many other more lucrative activities that hospitals outsourced in the past. Sukeľ pointed mainly to surgeries of specialist, laboratories, dialysis centres, transport services, non-medical services and others.

HPI sees the order of Drucker as the first of a series of steps and measures needed to improve financial status and ensure sustainable management of state hospitals for the future.

“HPI holds the opinion that the best way to improve financing of state hospitals is to change them into joint-stock companies,” said Pourová. “The obligation to keep standard book keeping and be subject to audit are the basic precondition for implementation of order and transparency.”

The ambition of the current government is to solve the current problems of the health sector while the programme statement addresses this too. This will require several systemic measures.

“The ministry sees the unbalanced position in the sector of diagnostics and laboratory tests and it is analysing possible solutions to remedy these relations,” Pondelová said.