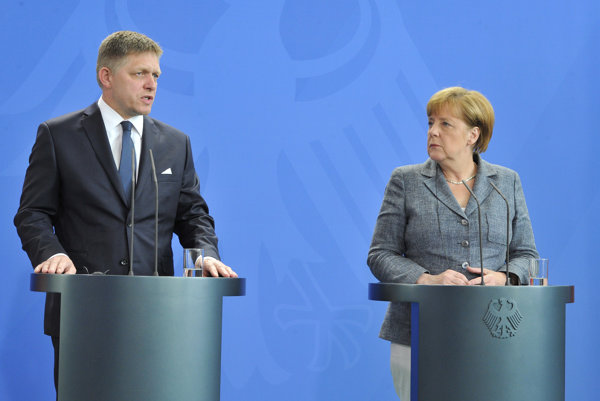 Following a meeting with the Slovak Prime Minister Robert Fico in Berlin on June 16, German Chancellor Angela Merkel said that she believes that Slovakia will be a good presiding country for the EU Council, and she does not have any doubts that Slovakia will master the agenda. Germany will strive to support Slovakia’s presidency, added Merkel.

“I know how hard it is to hold the member countries together,” Merkel stressed, as quoted by the TASR newswire. “I think it is necessary to support you.”

“Of course, there were also points on which our opinions diverged,” Merkel said, as quoted by TASR, specifying this concerns mostly the reception of refugees.

They agreed however on several other topics, including implementing an agreement with Turkey, defending the EU’s external borders and combating the influx of immigrants, the German chancellor pointed out.

Slovakia, as the presiding country over the EU Council, will put an accent mainly on areas where consensus is possible, Fico said. At the same time, such issues make up some 95 percent of the agenda. There are many points of consensus even in migration, such as common coast and border guards, he added.

In case of differing opinions, the Slovak PM wants to create enough space for discussion.

“As a presiding country we want to behave as a fair and good mediator of frequently differing opinions,” Fico said, as quoted by TASR.

The Slovak presidency will be dominated by four issues – an economically strong Europe, the benefits of the common market, sustainable migration and asylum policies and Europe’s engagement as a global player, Fico stressed, adding he wants to explain the EU agenda to the people.

Both Merkel and Fico would welcome a decision to remain in the EU by the British after their referendum. Regardless of the decision, it is obvious that Europe will change, Fico said.

“We will either deal with implementing the agreement between the United Kingdom and the EU or will deal with the departure of a member state from the EU, i.e. a challenge we have never faced before,” he added, as quoted by TASR.

Thus it is necessary to start a discussion over the image of Europe, the EU and European policy in the future, the Slovak PM said.

Merkel and Fico also discussed economic issues, focusing mostly on energy and the planned Nord Stream 2 gas pipeline project. The final decision will have to be made by the European Commission, Merkel said.

“We consider Nord Stream an economic project that should be implemented in compliance with the law,” Merkel added, as quoted by TASR.

The EC would thus decide under which regulation the project belongs. She considers it important that it will not negatively impact Slovakia and Ukraine.

“We essentially want to know whether the Nord Stream 2 project follows or does not follow the criteria of the Energy Union on which we agreed within the EU and we are waiting for the answer from the EC,” Fico said, as quoted by TASR, adding that it may cause big financial losses to Slovakia.