Only a few dozen years ago Liptov looked as it does on this postcard from the 1930s. Under the mountainside spread endless pastures dotted with wooden hay sheds. 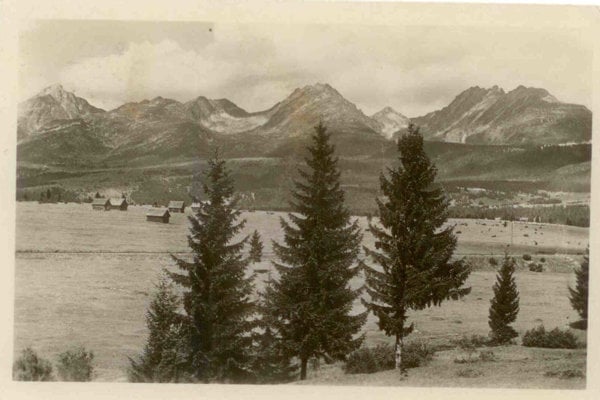 The traditional livelihood – which was here, in northern Slovakia, especially cattle and sheep breeding – was thus reflected in the look of the landscape.

In the past, herdsmen and shepherds in mountain areas used to drive cattle even to the alpine, above the forest zones. Steep slopes and peaks of tall mountains used to be completely grazed and, as usually nothing else grew there except for grass, they used to be called “hoľa”, as holý/holá means barren, naked. At lower altitudes, animals also grazed on “poľanas”, meaning logged clearings directly in the woods.

Hay sheds have almost disappeared from our meadows, but as can be seen in this postcard  there used to be many of them  in the mid-20th century.

Their decline is connected with the change of lifestyle but also of village architecture. Villages used to be composed almost solely of wooden blockhouses, and thus, there was a constant risk of fire. If a fire broke out and the village burnt down, at least the hay stored in sheds in the meadows outside the village was preserved. Their fears were understandable because as breeders of cows, sheep or horses, they simply could not survive without it.

To get the best-quality grass and hay, meadows were regularly dunged – in the north even more consistently than fields. When the time of mowing came, all neighbours arrived to help. Mutual solidarity showed here in a similar way as in wine-growing areas where people tended to help each other during harvesting.

Today, many of the pastures have been swallowed by forests and most hay sheds have perished. The ancient image of a herdsmen’s country has not been lost completely – it lives on in the folklore and in the cultural memory of Slovaks.