Seniors will have to use special cards for free travel

The court only cancelled the precautionary measure, but still needs to decide on the lawsuit. 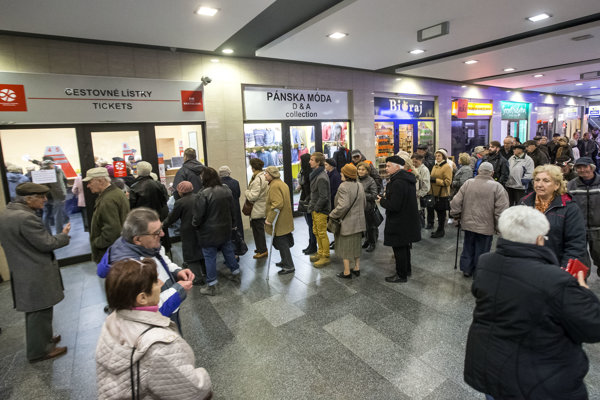 Dozens of pensioners were waiting to get their SeniorPas card last November. (Source: SME)
Font size:A-|A+

Seniors older than 70 years of age will need the so-called SeniorPas cards for free travelling within the integrated transport system in Bratislava Region, according to the ruling of the Bratislava Regional Court. The court thus dismissed the precaution measure which ordered the carriers to transport the seniors who prove themselves by showing only their ID cards, the SITA newswire reported.

The measure was issued by the Bratislava I District Court, based on a lawsuit submitted by the civic association European Institute for Consumer Protection and Rule of Law against carriers associated in the integrated transport system, i.e. the city transport company Dopravný Podnik Bratislava (DPB), bus company Slovak Lines and state-run railway carrier ZSSK, in January 2016.

The cards were introduced within the third phase of the Integrated Transport System in Bratislava Region (IDS BK) project last November. In order for seniors older than 70 years of age to travel for free, they need to obtain the SeniorPas card. They do not pay for the ticket, but have to pay a fee for having the card issued. If they do not have it, they can travel for half-price fares.

The European Institute for Consumer Protection and Rule of Law considers the SeniorPas cards bullying which abuses the unknowing of older people. The cards only complicate their situation, its representatives claimed, as reported by SITA.

The carriers, however, appealed the district court’s ruling, explaining the card is an important document on transport between carriers and passengers.

The regional court now dismissed only the precautionary measure. This means that the seniors now have time to obtain their own SeniorPas cards until August 1, 2016, the TASR newswire wrote.

The court still needs to decide over the lawsuit itself.

Spokesperson for the Bratislava Integrated Transport company Eva Kukurová said that seniors can obtain the SeniorPas card at selling points of all three carriers united within the system or via the internet. They also want to make it possible to prolong their validity (as they are valid only for one year) via machines for stamping the travel tickets, she added for SITA.

Meanwhile, more than 3,500 people signed a petition for simplifying the transport of seniors older than 70 years of age, from which the Bratislava municipality recognised 3,148 signatures. It was launched by former Bratislava mayor Milan Ftáčnik and the regional branch of the Union of Pensioners in Slovakia. They wanted the rules to be changed in order seniors use only their ID cards as it was before launching the third phase of IDS BK. Though they failed, the city councillors asked current Bratislava Mayor Ivo Nesroval to initiate the change to the law to simplify the system, SITA wrote.