Sieť tearing at the seams

Analysts say the party may not survive until the next elections 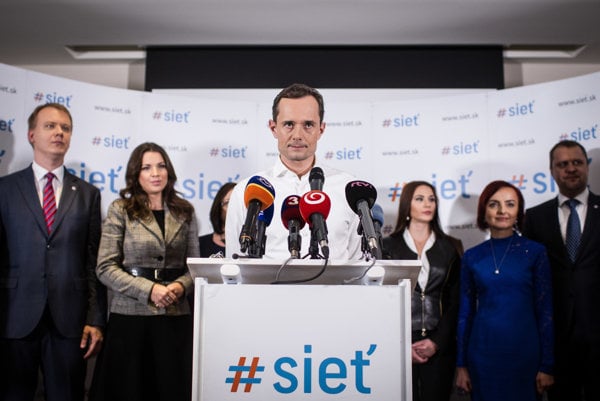 The smallest party in the ruling coalition, Sieť, seems to have lost not only the support of voters, but also its own members. A recent dispute between leader Radoslav Procházka and five of its MPs indicates it will struggle to remain in top politics after the end of the current tenure, political analysts agree.

“The party is in fact broken up,” Pavol Baboš from the school of political sciences of the Comenius University told The Slovak Spectator, adding that of the 10 MPs who made it to the parliament after the March 5 general election, just two now claim loyalty.

Still, few expect the turmoil to pose a direct threat to the government with defectors likely to support the coalition through the EU presidency in the latter half of the year.

The recent dispute in Sieť started after its founder and chair Procházka dismissed vice-chair Andrej Hrnčiar and recalled MP Martin Fedor from his post in party leadership on June 17. He did so after Hrnčiar announced earlier that day he had arrived at an agreement with Smer chairman Robert Fico on cooperation between Smer, Most-Híd and some Sieť MPs, without any official permission from the Sieť party leader.

“Such an approach is a display of gross disrespect of the statutes of Sieť, its congress and leaders as well as membership base,” Procházka said, as quoted by the TASR newswire.

Hrnčiar, however, said that he had only asked chairman of the Most-Híd party Béla Bugár and Fico for a meeting. He had not actually met them, as reported by Denník N.

Political analyst Miroslav Kusý however sees another reason behind this step: the pursuit of power.

Though Sieť also nominated deputy speaker of the parliament, it was Hrnčiar not Procházka.

In an interview with the Sme daily, Hrnčiar said that Procházka had asked him to give up his deputy speaker post, in exchange for “some lucrative position at the Transport Ministry”.

“I refused, and on June 17, at the session of our caucus, we talked about this situation – including activities since the election – and five of us expressed no confidence in our chairman, as we believe that Sieť has no future under him,” Hrnčiar added.

Though the pursuit of power may be behind the problems in Sieť, Baboš opines that the conflict has revealed that the relations in the party have not been good for some time.

The party is now divided in two groups. Hrnčiar and Fedor have been supported by three more Sieť MPs: Eduard Adamčík, Katarína Cséfalvayová, and Igor Janckulík. The only MP who still supports Procházka is Alena Bašistová.

The former doubt Procházka’s abilities to lead the party, criticising him for undemocratic leadership, managing the party like a private company, lack of communication with his party colleagues, no self-reflection and making others responsible for the problems, as reported by TASR. 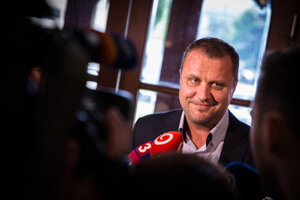 This however is not the first conflict Sieť has faced in its young life as a party. Shortly after Sieť had joined the coalition with Smer, the Slovak National Party and Most-Híd, three of its MPs – Miroslav Beblavý, Katarína Macháčková and Simona Petrík, quit the party. They however retained their parliament mandates.

One of the reasons for such state is that the party did not have solid foundations, Baboš and Kusý agree.

“It lived like a meteor and faded quickly,” Kusý added.

Another important reason was Procházka’s nature, said Kusý who considers him a quarrelsome and irresponsible person who does not keep his word. He also did not discuss the decisions with his party colleagues who wanted to co-create the policies of the party, the analyst opines.

One of the reasons why they tolerated Procházka may have been that the pre-election polls indicated much stronger position for the party, meaning they would be able to fill more posts in state administration and state companies, Baboš added.

“If they had problems with his behaviour, they did not persuade me why they started criticising him just now,” Baboš said.

No threat to coalition

The group around Hrnčiar and Fedor now call for the changes in order to restore the trust of voters. Though the party’s council was to meet and elect new chair only in early September, they now claim it should meet sooner. It is also possible they will nominate Cséfalvayová to run against Procházka, the SITA newswire reported.