The most recent statements made by Slovak National Party (SNS) chairman Andrej Danko about licence fees for RTVS might be viewed as an expression of distrust in Culture Minister Marek Maďarič of Smer. 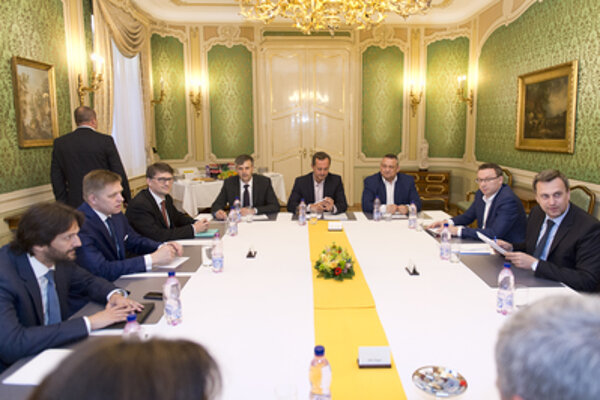 Thus, Culture Ministry spokesman Jozef Bednár reacted for the TASR newswire on June 22 to statements made by Danko in a recent political talk show on Tablet.TV.

The license fees to be paid by the public for the public broadcaster Radio and Television Slovakia (RTVS) have become a bone of contention, provoking a dispute even within the coalition parties (Smer, Most-Híd, SNS and Sieť/Network).

Bednár’s reaction was provoked by Danko’s statement concerning how to resolve the issue. “There is a gentlemen’s agreement within the coalition that we’ll discuss this only with the chairs of the ruling coalition parties,” said the SNS leader.

“If this is true, it means an indirect expression of distrust in the culture minister, as this agenda falls under the remit of the Culture Ministry, and the Culture Ministry prepared a proposal to boost public service RTVS’ financing based on the approved Government Manifesto,” Bednár said for TASR. Maďarič still wants to engage in the legislative proposal concerning payments for public services provided by RTVS, the state secretary stressed. “In this issue, the culture minister cannot imagine implementing any solution that would be prepared without his involvement,” he added.

Danko on the aforementioned Tablet.TV programme said that the dispute over licence fees definitely is not about gaining influence over RTVS on his part. “I served in politics even without RTVS, I attended their discussions maybe twice,” SNS’ chair said. “I had a system [for financing RTVS] in mind. There is a gentlemen’s agreement within the coalition that we’ll discuss this only with the chairs of the governing coalition parties, and I think we’ll come up with a solution that all the coalition parties will be satisfied with. People will be hit as little as possible, and that will move RTVS towards a better system of handling public finances.”

[SNS has expressed opposition to the Culture Ministry’s plan to increase licence fees, insisting that certain conditions should be met first.]

Maďarič has warned, though his official stance, already for a second time this month the SNS – but also Prime Minister Robert Fico – that this dispute can end by his resignation, the Denník N daily wrote. However, Danko’s party has not yielded in this dispute, either, not being intimidated by Maďarič’s threats. Last week, SNS representatives, without a word, left the Coalition Council abruptly when the licence fees started to be discussed. Danko disliked the tone in which PM Fico addressed him, and so he decided to leave, according to Denník N.