A stationary bike remade to extract honey premiered recently and is simple enough for primary school students to try. 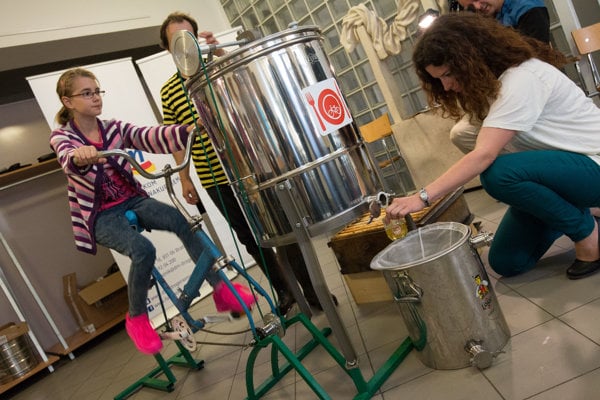 In the framework of project The Urban Bees, the first bicycle honey extractor was created in Slovakia and presented in the Water Museum in the Karlova Ves borough of Bratislava. The project has been worked on since 2014 by the organisation Živica (Resin), in this case connected with the civic association Cyklokuchyňa (Cycle Cuisine). One of its members, Jaroš Uroš, constructed a machine for extracting honey by connecting a stationary bike with a stainless steel honey extractor.

“Four frames with honey removed from the top wax layer, called honey gum, are put into the honey extractor. Cycling on the bike spins the honey pump, centrifugal force releases the honey and it flows into the enclosed container,” urban beekeeper and the program lecturer Petra Ježová explained for TASR, and added that they were inspired by a similar cycling centrifuge in Australia. While this type of system is practical, it is also fun and playful and can help get children involved in the process of making honey.

At the premiere of the honey extractor, the cycling was carried out by schoolgirls of the primary school of Alexander Dubček from Karlova Ves. Their presence was not accidental, because Živica in the framework of the project The Urban Bees cooperates with three schools from this city district, which has become friendly to pollinating insects. 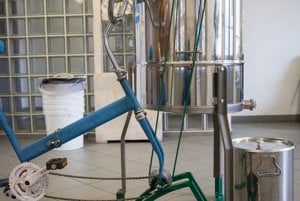 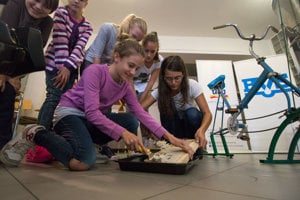 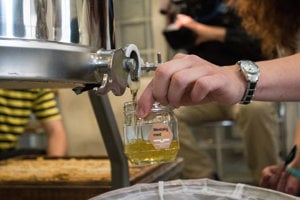 “Besides school groups coming here to the Water Museum to get acquainted with the bees, strawberry, lavender and other herbs and shrubs are being planted near the schools. The Municipality does not mow some lawns so often so that meadows blossom longer and are more available to bees for pollination,” substantiated Ježová.

“Bees can fly for nectar up to three kilometers, they use a large area,” said professional beekeeper Tomáš Blaškovič.

Raising urban bees is one of the activities of Živica because of benefits such as pollination, bee population rescue and recovery of non-traditional types of honey. The beehives are placed in parks, on the roofs of buildings or on terraces and balconies.