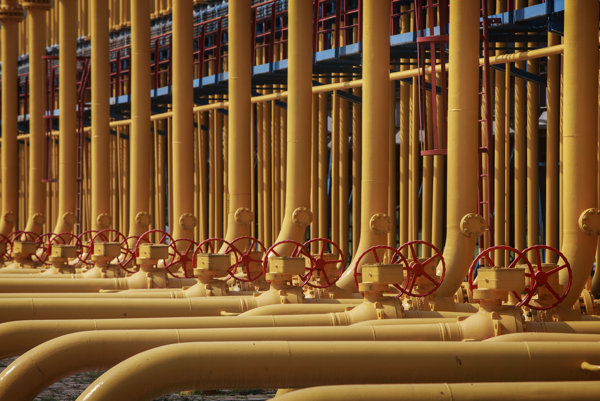 Veľké Kapušany, one of the border points between Slovakia and Ukraine. (Source: Sme)
Font size:A-|A+0

THE CONTROVERSIAL project to build a second leg of the pipeline Nord Stream to transit Russian gas under the Baltic Sea to Germany, bypassing Ukraine, remains a hot issue with Slovakia taking over the EU presidency in the latter half of the year.

In the meantime Slovak Prime Minister Robert Fico hinted that a solution that keeps the transit route via Slovakia and Ukraine could also use Slovak pipes to transit Russian gas from north to south.

“The impact of a pipeline such as Nord Stream 2 goes beyond the legal discussions,” wrote Juncker as cited by Reuters in a letter by which he responded to a March letter sent by nine EU member states including Slovakia opposing the plan. “If built, Nord Stream 2 could alter the landscape of the EU’s gas market while not giving access to a new source of supply or a new supplier.”

Juncker, speaking at a Russian economic forum held in St Petersburg on June 16, said that he had a strong preference for pipelines that unite rather than divide and that eastern EU states must have solid access to energy supplies.

The Slovak Economy Ministry argues that the main risk of the NS2 project is that it would undermine European priorities to diversify gas sources or transit routes by merely replicating existing routes.

“Apart from this, realisation of the project would lead to re-routing of gas transit which would have a significant impact on the gas price and situation in the context of energy security in Europe and its immediate neighbourhood,” Economy Ministry spokesman Juraj Rybanský told The Slovak Spectator.

The main concern of Eustream, operator of the gas transit pipes in Slovakia, is that if building and operating NS2 would mean bypassing current Ukrainian corridors, transit capacities for European clients would be fundamentally reduced. The firm would also stand to lose out on hundreds of millions of euros in transit fees.

“Thus we believe that in the end an agreement whose part will be keeping Ukrainian routes will be achieved,” Eustream spokesman Pavol Kubík told The Slovak Spectator.

Gazprom and its European partners agreed to build the NS2 last year and it should be put into operation in 2019, but that plan is far from assured.

There are fears that doubling the current capacity of Nord Stream to 110 billion cubic metres would actually mean a complete halt of gas transit via Ukraine and transiting Russian gas only via the Nord Stream pipes.

While the EC does not hold veto power over the project, the German regulatory authority is expected to issue its stance later this summer.

“If built, Nord Stream 2 would have to fully comply, as any other infrastructure project, with applicable EU law, including on energy and environment,” said Juncker, as cited by Reuters. “This is also the case for the off-shore infrastructure.”

According to Juncker, NS2 could not be built in a legal void, or only according to Russian law and Brussels is discussing the matter with German authorities and regulators before it issues its assessment.

The Slovak Foreign Ministry has refused to comment on the letter arguing that it is not common to publicly communicate about correspondence of EU institutions and member countries when opponents of the project are discussing next steps, ministry spokesman Peter Stano told the Pravda daily.

Energy analyst Karel Hirman perceives the Juncker’s letter that the EC is fairly defending the EU system without preference for individual countries.

“The only matter of the EC is to keep the valid legislation and rules including strategic documents and intensions so that justified interests of all member countries regardless of their size or locality are protected,” Hirman told The Slovak Spectator, stressing that he considers this to be of key importance amid doubts over the purpose of the EU and its operation. “Juncker confirmed legitimacy of fundamental objections of countries opposing Nord Stream 2.”

Will transit via Ukraine be preserved?

In the meantime Gazprom head Alexei Miller also spoke at the St Petersburg conference on June 16, noting that Russian gas transit to Europe via Ukraine will fall steeply after 2020 after a new pipeline under the Baltic Sea is completed. The transit should fall to 10-15 billion cubic metres a year, which would be only one-tenth of the existing capacity and less than one-quarter of the transit volume in recent years, Reuters reported.

Ján Klepáč, executive director of the Slovak Gas and Oil Association, sees this as proof that the Russian stance is changing.

“One year ago such a statement would have been unimaginable,” Klepáč told The Slovak Spectator. “At that time Russians claimed that after 2018 when the transit agreement with Ukraine terminates, not one cubic metre of Russian gas would transit via Ukraine.”

Klepáč notes that technical and security concerns mean that transiting gas via one route might be risky.

“Nord Stream is 1,200 kilometres long from Russia’s Vyborg to Germany’s Greifswald and for this length there is only one compressor station on the Russian shore,” said Klepáč, adding that while this is unique from the technical point of view there is a risk of technical failure that could endanger the security of Russian gas supplies to Europe.

Fico pointed out in a June 19 discussion on the TA3 news channel, that if Russian gas starts flowing only via Nord Stream and bypassing Ukraine, the Slovak transit pipe “would dry out”. This would mean a loss of hundreds of millions of euros for Slovakia. This is also why he has welcomed statements by German Chancellor Angela Merkel that Slovakia and Ukraine cannot be harmed by the project.

“Thus I can confirm today that we are doing our utmost to make sure part of the transit capacity of Slovakia for gas is used also in case of Nord Stream,” said Fico. Slovak infrastructure could be used for transiting gas from north via the Czech Republic and south to Austria, but the transit route from Ukraine via Slovakia should be preserved as well, he added.

Fico discussed gas transit over the territory of Slovakia with Gazprom’s Alexei Miller in Bratislava on June 20, Gazprom wrote on its website.

“The parties addressed the Russian-Slovak cooperation in the gas sector, discussing, inter alia, the collaboration between Gazprom and Slovak companies in gas supply and its transit via the Republic,” the company wrote.