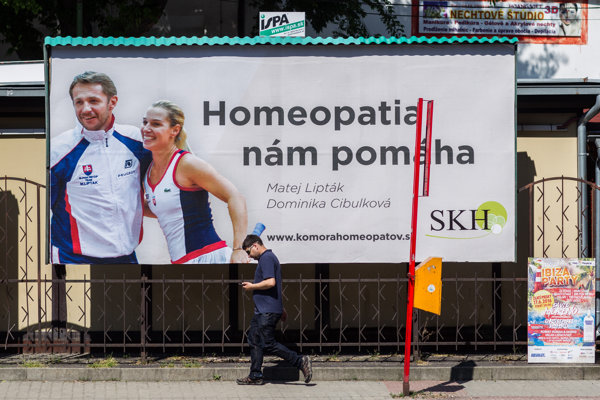 “Homeopathy is a way too” or “Homeopathy helps us” are some of the slogans featured alongside the faces of VIPs on billboards that have mushroomed around Bratislava recently – immediately attracting criticism from scientific circles.

“The campaign promotes the healer’s practice from the 18th century which denies basic natural laws and the ineffectiveness of which has been scientifically proven,” Ondrej Sukeľ, head of the Slovak Chamber of Pharmacists (SLeK), told The Slovak Spectator.

The Slovak Chamber of Homeopaths launched an advertising campaign in June. VIPs from various areas of public life lent their faces to the campaign. Meanwhile, experts call homeopathy pseudo-science unsupported by evidence and maintain that the advertising of thereof violates the ethics code. The Council for Advertising (RPR) has received two complaints against the campaign which an Arbitration Commission is going to examine during the next meeting in late June.

“If the commission decides that the campaign violates the ethics code, the owner will be asked to modify or recall it,” Eva Rajčáková, executive director of RPR, told The Slovak Spectator.

While Németh says that it is commonly used by many athletes, including the German national football team, Tekelyová considers criticism to be unfounded. We all live in a free society in which each individual has to decide on their own treatment, she opined for the Denník N daily.

Medical doctors and scientists criticise the homeopathy business. Scientist Peter Celec of the Faculty of Medicine of the Comenius University in Bratislava believes that rise of homeopathy is probably due to the depersonalisation of medicine through technological progress, “but mainly with the need of people to search for simple explanations and solutions”.

It is not easy to ensure a high-quality medicine as science moves forward, new more forceful remedies and procedures arise and clinical protocols must be still up to date, Celec believes.

“Biomedical research prolongs our lives based on evidence and clinical studies, not opinions and experience,” Celec told The Slovak Spectator.

In response to the criticism, Slovak Chamber of Homeopaths Chairman Vladimír Petroci stressed that homeopathy is the most scientifically verified method of alternative medicine.

The effects of homeopathy are confirmed by the fact that it is used all over the world and many countries have incorporated them into their health-care systems,” Petroci told The Slovak Spectator, listing Switzerland, France, India, Pakistan, Brazil, Mexico and Chile among such countries.

Billboards do not advertise any specific drug, hence “an assessment of the participation of the famous personalities who express personal beliefs in the campaign is irrelevant”, Petroci said with regard to the campaign.

Superior clinical studies and their results, on which medicine must be based, demonstrate that the homeopathic remedies are not any more effective than placebo in any of its applications, Celec argued.

Available only in pharmacies

All homeopathic remedies have fallen within conventional, not alternative, medicine after EU directives and regulations were incorporated into Slovak legislation. This means that they are available only in pharmacies, and some of them are subject to medical prescription, according to Sukeľ.

He believes however, that homeopathics should not be a part of the assortment of the public pharmacy, said Sukeľ.

Celec proposes in the context of plurality the establishment of a separate health insurance company which would offer additional private insurance to cover any unverified or verified but ineffective practices. He also says there should be consequences for those issuing homeopathic treatments that cause harm.

“Responsibility comes with any choice, be it in parliamentary elections, mortgages or medicine,” said Celec.

Currently there are almost 2,700 registered and used homeopathic remedies, according to the registry of the State Institute for Drug Control (ŠÚKL).

One of the best known homeopathic remedies in Slovak pharmacies is Oscillococcinum. Samuel Kováčik, doctoral student of theoretical physics at the Comenius University in Bratislava, took it as an example to explain for Denník N the lack of efficacy of homeopathy. The producers of remedy adulterate the original substance, extract of duck liver and heart, two hundred times in centesimal ratio, he noted.

“The universe full of Oscillococcinum which cost €30 per pack contains zero molecules of the original substance,” Kováčik told Denník N. “If we would like to get at least one molecule of substance, we would fill many billions of universes.”

Responding to the campaign

The campaign induces a false impression that homeopathy may treat patients better than proven medical procedures, although all recent relevant studies and statements of the World Health Organization, regulators and scientific academies throughout the world refute these findings, said Tomáš Prokopčák, deputy editor of the Sme daily, which has covered the campaign since its start.

“Homeopathy itself may not be dangerous but a patient may miss the opportunity and time to undergo proper medical treatment that is really dangerous,” Prokopčák said.

One of the most important skills in today’s surplus of information is evaluation and filtering sources already from school age, said Celec.

Prokopčák proposes that authorities may set up rules about what is or is not ethical, and then monitor their observance.

“Core values should include honesty, veracity and not misleading people, whatever the campaign in question is devoted to,” Prokopčák said.