City’s greener side is growing

Community gardens are starting to take root across the capital.

Crossing a busy road and creeping through a slightly opened gate brings you in a completely different world of a community garden and vineyard. Bordered by a railway on one side and a busy road on the other, the space provides a shelter from the everyday rush, but also place to grow fruit and vegetables, and meet others with the same inclinations.

The garden at Pionierska street is one of several community gardens that have mushroomed across Bratislava during recent years. Most are the results of spontaneous initiatives of local people.

“We wanted people to be interested in matters in their neighbourhood and outside their living rooms,” Sandra Štasselová from the civic association Vnútroblok told The Slovak Spectator.

Štasselová as well as others launching community gardens were inspired by experiences abroad.

“It was our experience from Amsterdam that inspired us,” said Štasselová. “We moved into a city that was new to us and where we knew nobody. Coincidentally in the courtyard of the block of flats we lived in was a garden that helped us to feel really good in Amsterdam.”

The garden, launched by their neighbour and conceptual artist Natascha Hagenbeek, was for them a paradise of inclusion and nice helpful people, recalls Štasselová. Inspired by this positive experience after returning to Bratislava she, her husband Michal and others launched Vnútroblok with an idea to repurpose unused spaces in Bratislava. 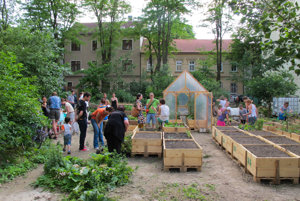 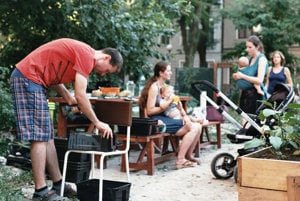 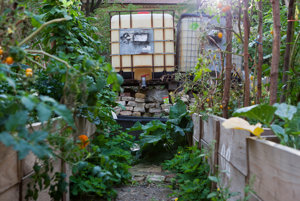 “The aim was to do something that will encourage engagement of people in co-creation of their neighbourhood and the city,” said Štasselová, adding that gardens were only one of the activities for which an unused place can be used. “Slovaks are very nice and cordial people; but we need place and opportunity to establish contact.”

Gardening provides such an opportunity as many people still have fond memories and past experience with it.

“It is amazing how a common crackdown against pests can join completely different people,” said Štasselová. “We all eat and have some relation to a meal. And this is an excellent start for improving relations and interest people in public space more.”

So far Vnútroblok has launched three gardens. The first one was located on a private plot at the Sasinkova street that was for sale but the owner enabled them to launch and run the garden there until he sold it. In order to be able to move out when they are asked to do so, they put wooden boxes with soil for growing plants on wooden palettes. The garden existed for three years, between 2013-2015. Afterwards they agreed with the Bratislava city council to use an abandoned vineyard at Pionerska and started their first season here in the spring of 2015. Here the group grows vegetables and fruits in garden boxes as well as grapevines. And in the spring 2016 they launched a movable garden at a courtyard of a school at Karpatská street. 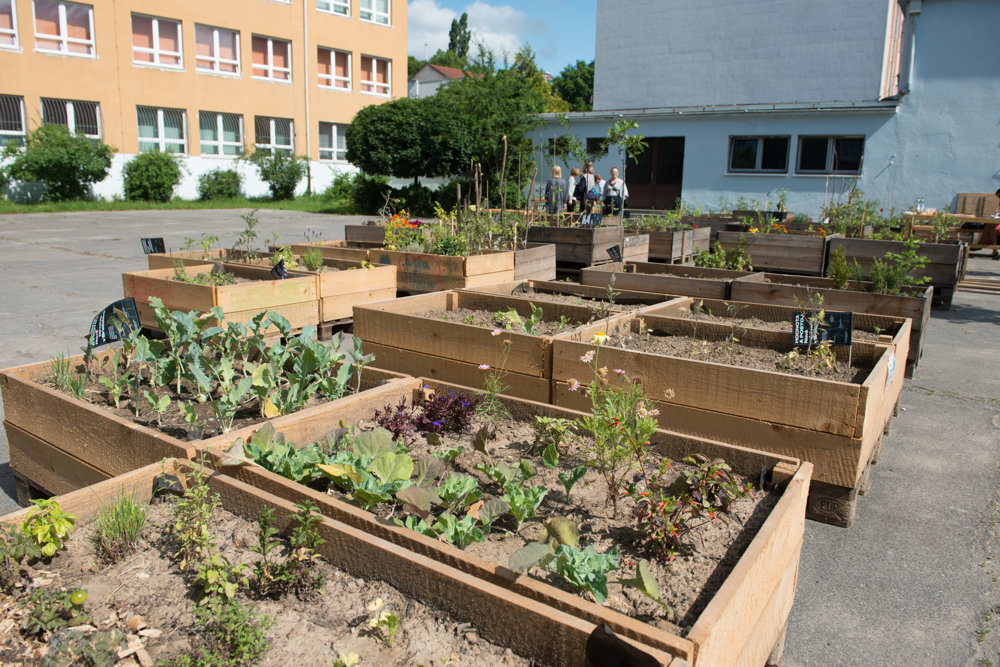 While Pionierska is a result of cooperation with the Bratislava city council, in case of Karpatská it was Ľubica Jégrová, the director of the school for mentally handicapped children who addressed Vnútroblok with the idea to launch a garden. Her goals were to make the school’s cement courtyard greener and create a place for children to garden.

“Fortunately, the fanatics from Vnútroblok grasped my idea and helped to materialise it,” said Jégrová, adding that children attend to 10 boxes and in the rest people from the neighbourhood grow plants.

Stories of other community gardens are similar: the enthusiasm of people to grow their own fruit and vegetables, get to know their neighbours better and do something beneficial for the local community – but nevertheless each of them is unique.

Krasňanský Zelovoc was inspired by similar projects in Berlin (Prinzessinnengarten) and Prague (Prazelenina). Initiated by Miroslav Dudlák, it was launched in 2013 and this is already its fourth season. 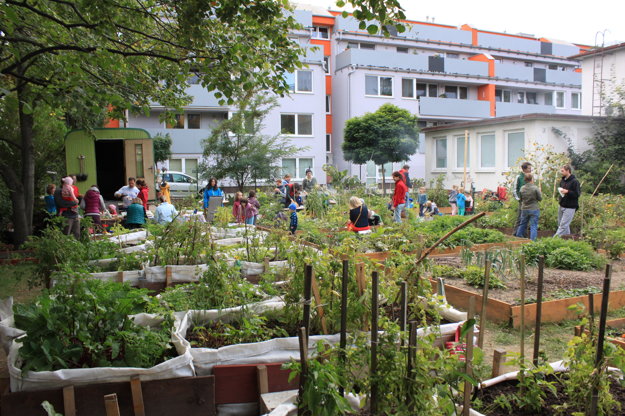 “The main benefit is that people went outside their flats, got to know each other and started to do something that has brought them pleasure,” Matej Mikuška of Krasňanský Zelovoc told The Slovak Spectator. “Children growing up in a housing estate have found out that carrots don’t grow on a shelf in a supermarket and that the tastiest strawberries are the ones they grew on their own.”

“The inspiration arrived out of the need to leave the current system,” Žilková told The Slovak Spectator, adding that the garden shows a way how to live in harmony with nature and animals. 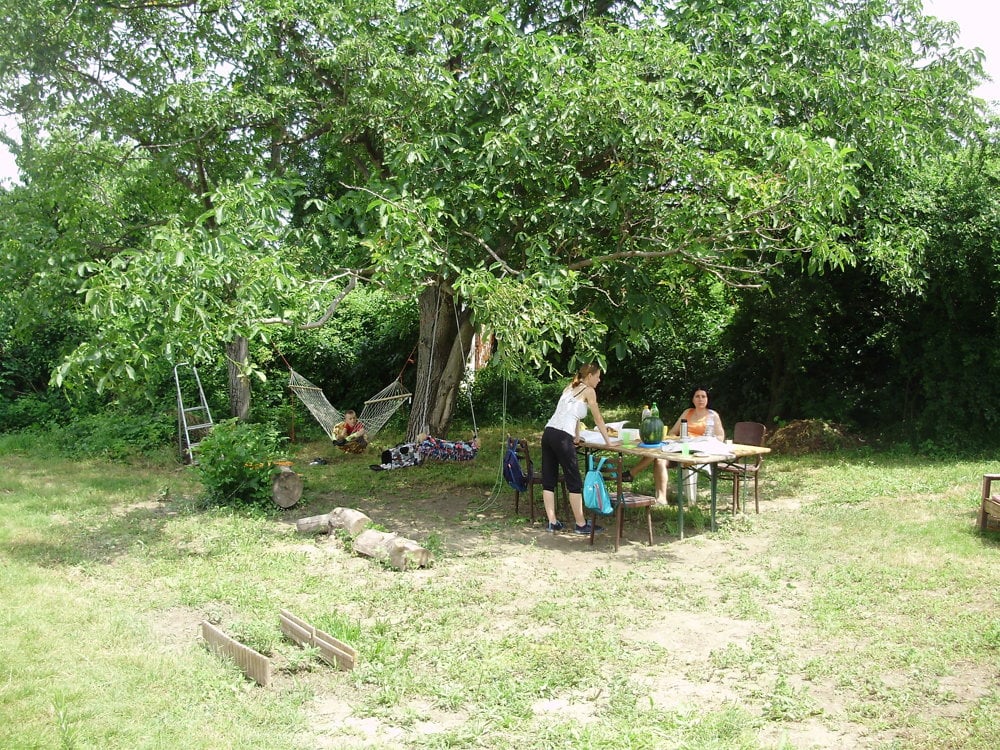 Another two gardens were launched by the non-profit organisation Živica within their project By Unbeaten Path in 2013.

“We drew inspiration from abroad where such gardens are very popular,” Petra Ježková of Živica told The Slovak Spectator. “We wanted to bring to Slovakia activities that people can do to protect the environment directly in the city. This is why we have chosen community gardens and bees.”

Živica founded two gardens in Bratislava – on the premises of the Water Management Museum and in Devínska Nová Ves – and one in Zvolen. After the launch they passed management of the gardens on to local residents.

Other community gardens are run by the civic association Jedlé Mesto, Latifundia in Dúbravka, and Projekt Život. In the past Jedlé Mesto also ran a community garden on the terrace of the reversed pyramid of the Slovak radio, but the project was closed last year.

Apart from problems when obtaining land for a community garden, those involved mention vandalism as a big problem. Just days after the launch of Krasňanský Zelovoc, vandals raided the area. The Pionierska garden has also several negative experiences when somebody removed recently planted grapevines last year. Some robberies have occurred this year too.

“Thieves at Pionierska were probably the most negative part of the work,” said Štasselová when recalling the problems they encountered when launching the gardens.

Mikuška of Krasňanský Zelovoc added that vandalism in community gardens but generally in other publicly beneficial and volunteer projects is a very sad expression of ill will and intolerance.

When selecting suitable plots Živica prefered places that can be locked.

The garden in Vrakuňa took a different approach.

“We have two trailers on the plot,” explained Žilková. “People, whom the system deprived of their home, live in them. Thus they have a place to live and are the garden guards. Of course, guard dogs help us, too.”

Mobilná záhrada Karpatská (Movable garden Karpatská) – The garden with wooden boxes with soil on wooden palettes is located at the courtyard of the Special School and Kindergarten at Karpatská 1. It was launched in the spring of 2016. Out of 50 boxes 10 are used by the school and the rest by other gardeners. This season all the boxes are occupied while enrollment for interested gardeners takes place each March. 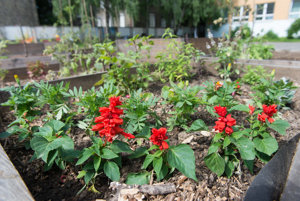 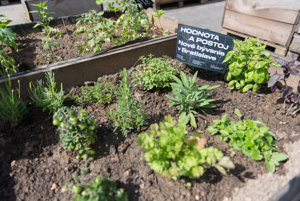 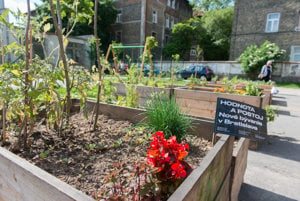 Vinica a Mobilná záhrada Pionierska (Vineyard and movable garden Pionierska) – The project with the Bratislava municipality involves renewal of an abandoned vineyard while about 100-110 people grow vegetables and fruits in 90 wooden boxes located between the grapevines. This season all the boxes are occupied. Sign up is in March. 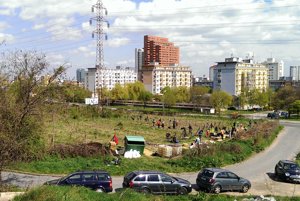 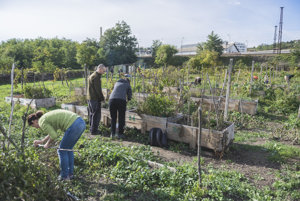 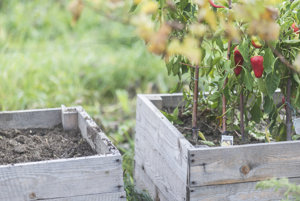 Krasňanský Zelovoc (Krasňany Grocery) – Launched in the free space between blocks of flats in Krasňany, a Bratislava borough, in 2013. Gardeners grow vegetables and fruits, while the number of those interested exceeds the garden’s capacity. There is a waiting list with those wanting to join. The community is open also to volunteers without gardening ambitions who participate in other activities. 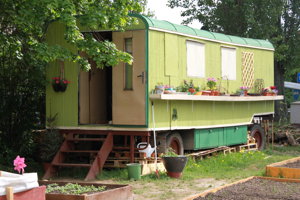 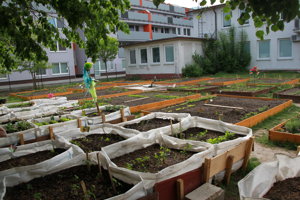 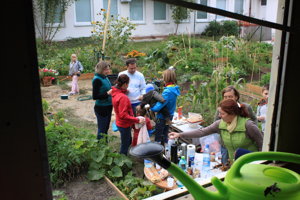 Vrakunská komunitná záhrada (Vrakuňa community garden) – It is located at the end of Leknová street in Vrakuňa, a Bratislava borough. There are about 15 active members while some primary school classes have joined too. The plot is divided into parts for gardening and for raising animals. There are also grown fruit trees and new ones are being planted. There are beehives, so those interested can keep bees on their own. The plan is to house hens and quails for eggs and goats for milk. There are openings for new gardeners. 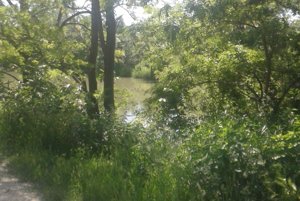 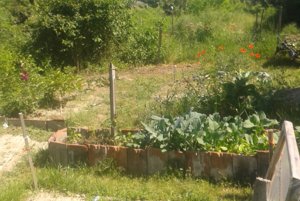 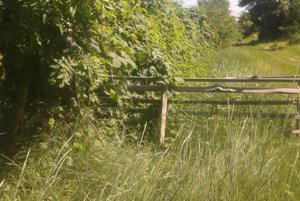 Vodárenská komunitná záhrada (Water-management community garden) – Located in the premises of the Water Management Museum at Devínska cesta 1 close to the Danube River. Apart from elevated beds for growing vegetables and fruits and a herb garden there is also an old, but functional, greenhouse. There are also beehives. 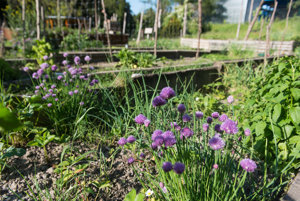 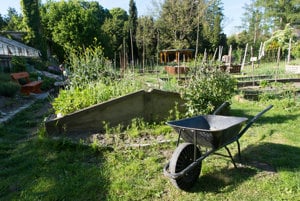 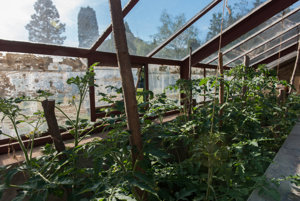