The Interior Ministry registered a paramilitary group which is now able to ask for donations. 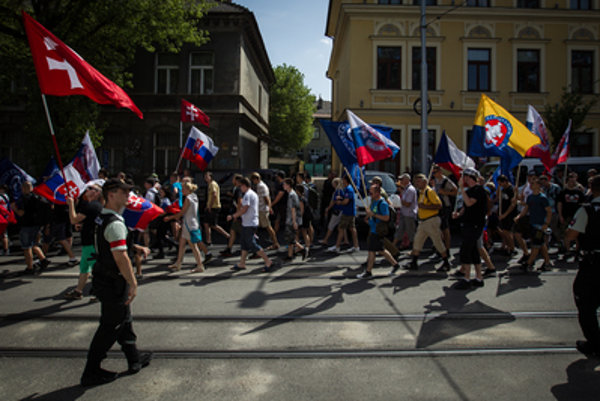 During 2015 the massive “protest against islamisation of Europe” the Slovak far-right scene witnessed an extraordinary situation. Key members of extremist groups met in one place and observers warned that they planned a joint approach in upcoming general elections.

Some of them even joined the slate of the politically most successful extremist party People’s Party – Our Slovakia (ĽSNS) of Marian Kotleba which made it to the parliament. However, the plan failed and many extremists distanced themselves from Kotleba or supported him reluctantly.

“Kotleba is just an empty brand name without consistent content which is proper for protest voters,” extremism analyst Radovan Bránik told The Slovak Spectator. “Authentic extremists and radicals are still waiting for the possibility to vote without compromises.”

Conflicts between extremists repeated at a June 25 protest in Bratislava bearing the name “Stop the liquidation of Europe” which sought to repeat its past success.

With around 5,000 participants the protest on June 20, 2015 was one of the largest and most violent in recent Slovak history, shutting down traffic in some Bratislava squares and keeping hundreds of police officers busy. Law enforcement detained about 76 people suspected of riotous conduct with 41 of those detained coming from the Czech Republic. The police filed criminal complaints against 19 Czechs and 13 Slovaks.

This year, however, only 1,000 people attended the protest and were outnumbered by 2,000 people who joined the anti-fascist march.

Several extremist figures attended it such as Marián Magát, the leader of extremist paramilitary group Action Group Vzdor, former police officer Lukáš Kopáč who was prosecuted for burning the EU flag and leader of extremist group Slovak Togetherness Jakub Škrabák attended the protest. However, Kotleba did not show up, even though he appeared at the 2015 protest.

Kotleba distanced himself from the march due to worries of extremism. He rejected the invitation of organisers explaining that their party could be discredited and disbanded based on the presence of radical addresses and people there, said Magát during the event.

If a far-right party wants to be successful it has to abandon extremely radical rhetoric and use a milder, more populist one. Kotleba’s party is proof of that, according to Tomáš Nociar, a political scientist focusing on extremism.

“If far-right parties want to have political success they have to be interesting also for segments of traditional voters,” Nociar told The Slovak Spectator. “It [doing politics] is pointless without them but extremists’ rhetoric rather dissuades them.”

Since Kotleba failed to persuade the most radical voters, extremists are preparing a new project distancing themselves from Kotleba. The organisation Slovak Resurgence Movement led by Róbert Švec could become a strong player in the game. Currently it is under transformation from citizen organization to political party and later it plans to change its rhetoric to attract more voters, according to Bránik.

However, it is not likely that more radical groups will repeat the success of ĽSNS, according to Nociar.

“It took 10 years for people to learn who Kotleba is,” Nociar said. “Moreover, if they steal some votes, it will be from ĽSNS due to their ideological closeness.”

“We will punish hate crimes and criminal acts of extremism more effectively,” Žitňanská wrote on her Facebook page on June 26.

The changes include amendments to the Penal Code and Penal Order. If her proposals go through, a case like that of ĽSNS MP Milan Mazurek should not be repeated. Last November media reported about Mazurek’s Facebook statements where he praised Hitler and said about the Holocaust that “6 million and soaps from Jews are lies and fairy tales.” The police, however, refused to prosecute him as Mazurek allegedly did not directly comment on the Holocaust.

Žitňanská proposes that the Specialised Criminal Court deal with these crimes, while the definition of a racially motivated offence will be adjusted.

Moreover, it will be considered a crime to establish a movement whose actions go against fundamental rights and freedoms.

A few weeks before Žitňanská announced the new legislation the Interior Ministry registered civic organization Our Country – Our Future which is a branch of Slovak Levies. Ministry employees did it despite the fact that levies are mentioned in reports on extremism of the same ministry for being close to extremist ideas.

Our Country – Our Future is registered as an environmental activist group which gives them the possibility, for example, to ask for state donations. It is possible that they will transfer such money to their main organisation which may use it to buy military equipment and the state will not be informed about it, Sme daily wrote.

The ministry claims that it found nothing illegal in the organisation’s code of rules therefore it had to register it following the Constitutional rules.

“I can’t understand that,” Jaroslav Naď of Slovak Security Policy Institute (SSPI) told The Slovak Spectator. “A state body registered a civic organisation of a paramilitary group which is monitored by this state body knowing how it operates and who is behind this group. If legislation forces the ministry to register such groups it should be changed.”