Opposition MPs are seeking to recall Interior Minister Robert Kaliňák for a second time. The proposal was filed on June 24 and the vote takes place on June 30, beginning at 13:00. 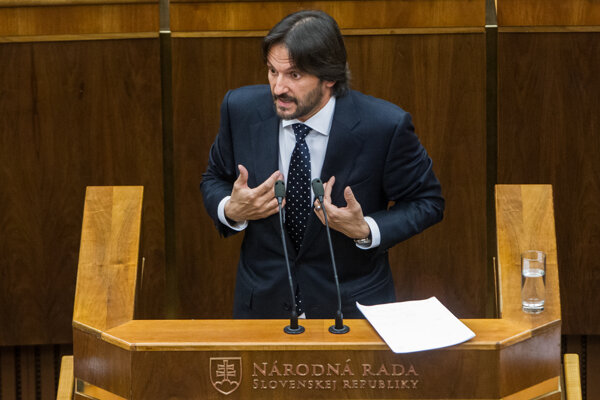 They already tried to remove Kaliňák in a parliamentary no-confidence vote on June 7 – due to his shady connections and deals with businessman Ladislav Bašternák. However, the proposal was supported by 58 MPs of 138 present, 76 were against and four abstained from the vote.

One of the initiators of the extraordinary session on June 30 for the no-confidence vote, leader of the Ordinary People and Independent Personalities (OĽaNO) Igor Matovič, said that the theme for summoning it is substantiated, as new facts have been published. “Kaliňák then claimed that he did not have any dealings with Bašternák,” Matovič said, as quoted by SITA. “The interior minister repeatedly defended crimes which Bašternák committed by robbing the state of 12 million euros. The minister deliberately and willingly lied at the session. Kaliňák met with Bašternák at the time when the financial administration was after him [the latter], and bought from him his share in the company.” Matovič summed up that buying shares for a low price can de facto be considered a bribe. Later, Kaliňák’s police shelved the investigation.

The government at its June 30 session disagreed with the proposal for a no-confidence vote – which came two weeks after a similar failed attempt – which it perceives as causing a bad reputation for the Slovak Republic before its presidency over the Council of the European Union, SITA wrote.