July 1 does not bring only the beginning of Slovakia’s first-ever presidency over the EU Council, but also a protest of teachers. 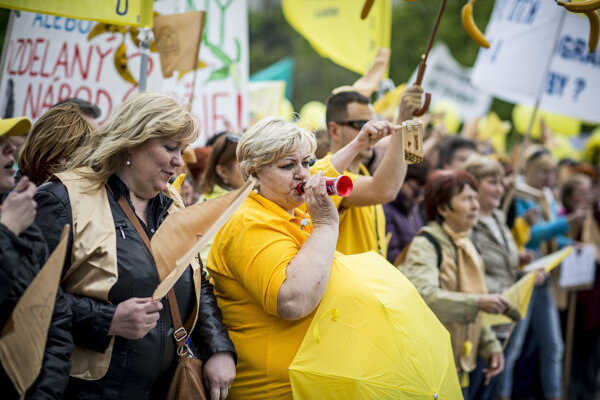 The end of the school year has been busy for teachers, who have continued their fight for improving the situation in the education sector with various protest actions and even a six-week-long strike at schools across Slovakia. Since the new government still has not met their requests, they are ready to continue and even start a new strike in September.

The teachers will return to Bratislava’s streets on July 1. It is not only the start of summer holidays at schools, but also the 100th day of the current cabinet and the first day of Slovakia’s presidency over the Council of the European Union.

“The presiding country doesn’t do its own homework,” Vladimír Crmoman of the Initiative of Slovak Teachers (ISU), the protest’s organiser, told the press on June 29.

The aim of the protest march is to point to the government’s disregard for the recommendations of the European Commission and the Organisation of Economic Cooperation and Development to improve the situation in the sector, and also to the requests of teachers which drove them to the streets in the end of 2015 and in early 2016.

“It is startling that ISU still has not received an explanation as to why its requests have not been met yet,” Branislav Kočan of ISU said.

The protest has already been supported by various organisations in the education sector. Yet it has not been backed by the Trade Unions of Employees of the Education Sector and Science (OZ PŠaV), the official trade unions organisation at schools. As the organisation does not organise the event, its council has decided to leave it up to its members whether they will join it or not, the unions' head Pavel Ondek explained to The Slovak Spectator.

Protest in the streets

Among the main requests, voiced also by the international organisations, is a hike in teachers’ salaries which are much below the average of other professions requiring university education. While teachers at kindergartens earn about €600 gross per month on average, teachers at primary schools €762 and teachers at secondary schools €791, the average pay of other university educated employees amounts to about €1,102, according to the statistics published by the Platy.sk website in November 2015.