Slovak painters Marek Ormandík and Erik Binder were not allowed to exhibit their works at the headquarters of the European Commission, as they were perceived too negatively. 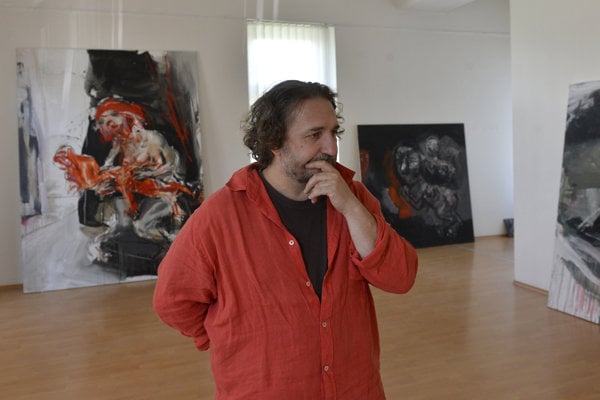 The EC planned to exhibit a total of 300 works in the Berlaymont building, situated in the centre of Brussels. Originally, 10 Slovak authors were invited to place there their paintings, but in the end two were left out.

The official reason, as told by curator Eva Trojanová, was that the paintings evoke fear, negative thinking and religious motifs which are not appropriate in the current situation, the Denník N daily reported.

“Although we appreciated the expressiveness and strength of these works, we consider them too heavy for a working environment,” reads the official statement published at Ormandík’s Facebook account. “Please take into consideration the fact that the Berlaymont hosts up to 2,000 staff members of the Commission from the 28 EU member states, and receives around 1,000 external visitors from all over the world, covering altogether a very diverse range of cultures, religions and sensitivities. Also, the Berlaymont is a public building, and we therefore need to avoid any risks of showing images which may create controversy or hurt people’s sensitivity.”

Ormandík considers it “a flagrant example of censorship”, as reported by the Pravda daily. Also Binder was surprised by the decision, saying that his work was rather Euro-positive.

Trojanová considers the step an absurd intervention into creative production which could have been witnessed in the past rather than today. She was told to prepare a collection of Slovak art for Brussels from the Culture Ministry. All paintings will be part of the temporary decoration of the interior of Berlaymont building. It is not an official exhibition held as part of Slovakia’s presidency over the EU Council, Denník N wrote.

“If a client expects there will be some limitations from his side, it is good to specify them in advance,” head of the Slovak National Gallery Alexandra Kusá told Pravda. “If it does not happen, the negative answer may seem like censorship.”

She also reminded of the fact that since it is a decoration for an administrative building, there is a difference when choosing the representing works. People seeing them may perceive them differently as if they were part of, for example, a historical exhibition, Kusá specified for Pravda.