Deal with the Netherlands signed 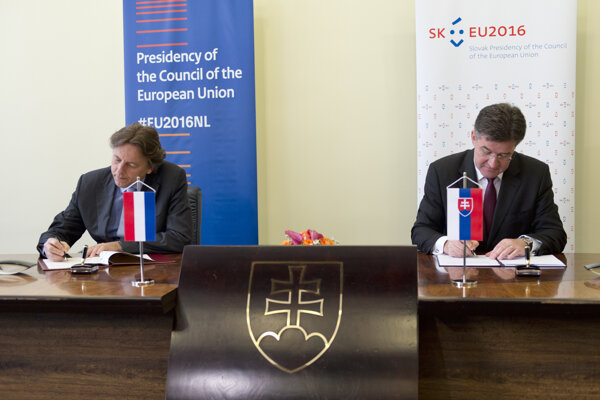 “Our network of representation authorities is not identical, which means that in some countries Dutch diplomats will carry out tasks linked to the presidency instead of us and that we will represent them at some levels,” Lajčák said after signing the deal on June 2, as quoted by the TASR newswire.

The agreement concerns, among other things, chairing the working groups and committees of the EU Council, where the Dutch experts should help Slovakia in areas where it lacks its own professionals, such as issues linked to the sea affairs and fisheries policy. This kind of cooperation will take place only at lower levels and in close cooperation with Slovak experts. Lajčák told the press that he invited Koenders to the meeting of Slovak ambassadors to tell them what they can expect during the presidency, what tasks or requests they will have to deal with. Moreover, they were able to discuss also the political agenda and the topics which the Netherlands will leave for Slovakia during its presidency, he added.

Koenders said after the meeting that his country wants to cooperate with Slovakia closely.

“I think this is a unique opportunity, even though the current situation is not very easy for those at the helm of the EU,” the Dutch foreign minister said, as quoted by TASR.

Slovakia has already signed a similar agreement with Malta, which will take over the EU Council presidency in the first half of 2017.