The National Bank of Slovakia (NBS) issued a silver collector coin worth €10 on the occasion of the country’s presidency over the EU Council on June 14. The author of the design is painter Vladimír Pavlica, the SITA newswire reported. 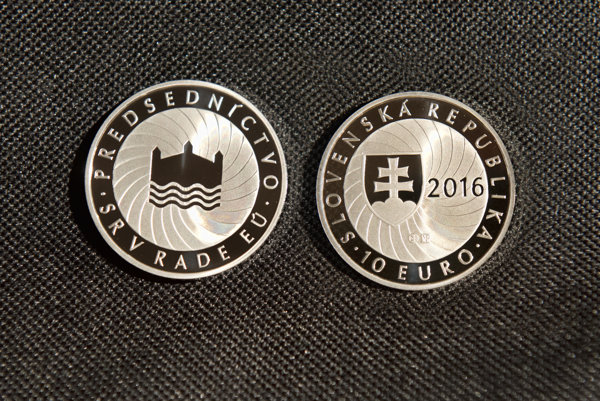 The coins were minted in Kremnica (Banská Bystrica Region) in a limited number of 11,000 pieces.

The front of the coin depicts the state symbol with centripetal dynamic lines in the background, which represents the position and importance of Slovakia during its presidency. On the right side is the year 2016, while on the edge is the inscription “Slovak Republic” graphically divided from the nominal value of the coin. In the bottom the sign of the mint in Kremnica and the initials of the design’s author are placed.

On the back, a silhouette of the Bratislava Castle and waves representing the Danube, with centripetal dynamic lines in the background, are depicted. Near the edge of the coin the inscription “Presidency” which is graphically divided from another inscription “of SR in the EU Council”.