Minister Kaliňák did not face the second no-confidence vote in the parliament on June 30 after the session was suspended indefinitely. The parliament speaker wants to deal with parliamentary rules first. 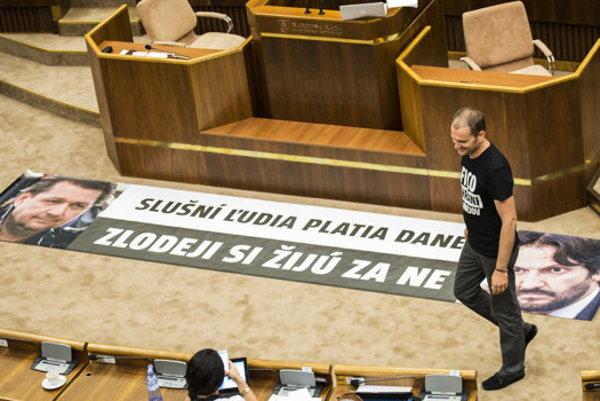 Interior Minister Robert Kaliňák has not faced the no-confidence vote in the parliament on the last day of June as originally planned.

The Parliament’s Speaker Andrej Danko of ruling coalition’s Slovak National Party (SNS) suspended the session indefinitely, arguing that a banner that the opposition used during the parliament’s session in the plenum was procured unlawfully. It was not clear on Thursday evening when the session would reconvene. Danko decided to focus on updating parliamentary rules first, to clarify how banners should be used in the parliament and what clothes MPs should be wearing for parliamentary sessions. The opposition meanwhile continues organising public protest gatherings to support their attempt to oust Kaliňák.

It is the second no-confidence vote that Kaliňák faces in the course of a month. Opposition already tried to remove the minister in a no-confidence vote on June 7 – due to his shady connections and deals with businessman Ladislav Bašternák. However, the proposal was supported by 58 MPs of 138 present, 76 were against and four abstained from the vote.

The case pertains to the excessive VAT refunds granted to businessman Ladislav Bašternák’s firm BL-202 which bought and sold seven apartments in the Five Star Residence complex. Bašternák reportedly bought them for €12 million. The company then applied for a VAT refund of €2 million and the state paid it out, despite suspicions that the transaction was fictitious. The state later paid an additional €6 million in VAT refunds and saw no reason to verify them.

In further development, the assistant of opposition MP Jozef Rajtár of Freedom and Solidarity (SaS), Filip Rybanič, took documents from the Tatra Banka bank which show that €260,000 arrived to Kaliňák’s account from the B.A. Haus company, a firm operated by tycoon Ladislav Bašternák until October 2013. Similar payments arrived also to account of former transport minister Ján Počiatek who left politics in mid April.

Later still the media reported that also former defence minister Martin Glváč and two prosecutors assigned to deal with the Rybanič case lived in apartments in a building owned by Bašternák at Tupého street in Bratislava. 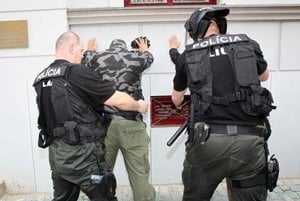 Prime Minister Robert Fico took the floor in the parliament again, just like during the previous no-confidence vote, and proceeded to defend the interior minister on behalf of the government.

The ruling cabinet prior to the special parliamentary session expressed its support for Minister Kaliňák, and Fico read the cabinet’s stance to the MPs in the plenum.

Fico pointed to Kaliňák’s efforts to fight tax fraud in his ministerial post (which he now holds for the third term), and in turn listed some corruption suspicions and scandals that the centre-right government in 2010-2012 faced, the Sme daily reported. 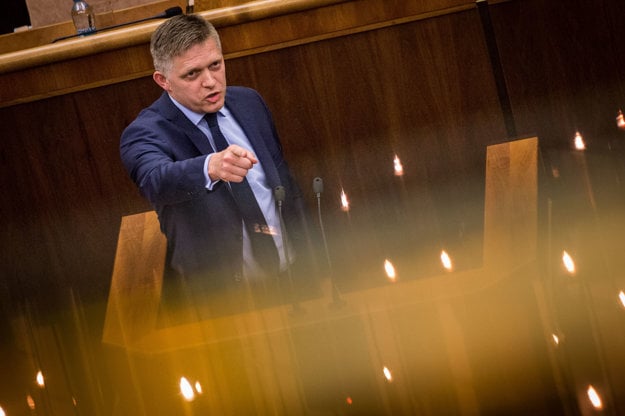 “You are aiming to destruct the Slovak presidency,” Fico said as quoted by Sme, and again accused the opposition of “spreading the politics of hate”. He insists that Kaliňák has used clear arguments and presented proof to dispute the allegations against himself.

The session was opened one day before Slovakia took over the rotating EU Council presidency.

Originally, 23 speakers were entered on the list of the session, but only a few of them got the chance to speak before the session was suspended. After opposition Ordinary People and Independent Personalities (OLaNO) head Igor Matovič refused to put down his poster after repeated requests from Danko, the parliament’s speaker interrupted the session. The MPs thus parted after six hours of debate that bore no fruit.

The banner that upset the ruling coalition MPs and Parliament’s Speaker Danko carried the photos of Ladislav Bašternák and Robert Kaliňák, and a rhyme that translates like “Decent people pay their taxes, while thieves live off them [the taxes]”.

Danko repeatedly requested Matovič to remove the banner from the plenum, and interrupted the session twice for that reason. He argued that the banner was made unlawfully because the minister did not authorise the use of his picture on it.

Matovič is notorious for his use of various stage props in the parliament and at press conferences. Most recently, during the first no-confidence vote in Kaliňák, he and his movement’s MPs brought 24 shopping bags filled with fake 100-euro bills worth €12 million, and poured them over the speaker’s counter when Matovič was speaking to the plenum.

New rules to be discussed

Opposition MPs were outraged to see the session suspended, and accused the ruling coalition of seeking “substitute problems to postpone the inevitable”, Freedom and Solidarity (SaS) MP Natália Blahová said as quoted by SITA.

Daniel Lipšic of OĽaNO-Nova opined that Danko’s decision was an unprecedented violation of the parliament’s rules, and argued that the law allows use of visual properties “for tens of years”.

Danko however, argues that as Slovakia takes up the EU Council presidency on July 1, all eyes of the international community will be focused on the country and the parliament “should be the showcase of the state”. Meanwhile, he believes, there is a lot of offensive and defaming behaviour in the parliament, he said as reported by SITA.

Danko believes the gremium on Friday can solve the problem with the outdated parliamentary rules and the updates should regard not only banners, but also dress code and vocabulary that is acceptable during sessions.

Prosecutors should give more answers

Meanwhile, prosecutors dealing with some issues pertaining to the Bašternák case will have to clarify their property circumstances and explain their links with the tycoon, General Prosecutor Jaromír Čižnár said as reported by the TASR newswire.

Čižnár said he would request further explanations from his subordinates following media reports from late June according to which there are links between Bašternák and the prosecutors who are in charge of the criminal prosecution of Filip Rybanič, an MP assistant who leaked information about the bank account of Interior Minister Kaliňák earlier. 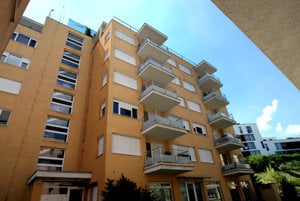 While the prosecutors in question, who have been reported to own flats in a building owned by Bašternák, will be required to update their asset declarations, Rybanič’s case will be overseen by prosecutors from Nitra, the General Prosecutor decided as reported by SITA.

Meanwhile, the opposition continues organising protest gatherings to support their attempt to have Kaliňák ousted from the post of the interior minister. Two protest gatherings took place in Bratislava earlier in June, both times attracting a crowd of some 2,000-3,000. 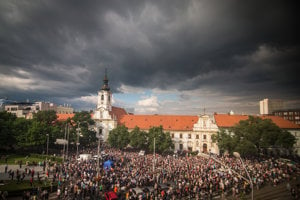 On Monday, July 4, two simultaneous protests should take place, one in Bratislava organised by OĽaNO-Nova and another one in Košice organised by SaS. The opposition leaders argue that not everyone is able and has the time to travel to Bratislava for a protest gathering, so they want to give a chance to people in the regions to protest too.

One day before the no-confidence vote session was opened, the police raided Bašternák’s premises in Bratislava. Opposition and some commentators have suggested this could have been timed to calm the public before the no confidence vote, but did not expect it to bring any results.