Prime Minister Robert Fico faces an attempt to remove him from his post. The opposition files a dismissal motion signed by 34 MPs. 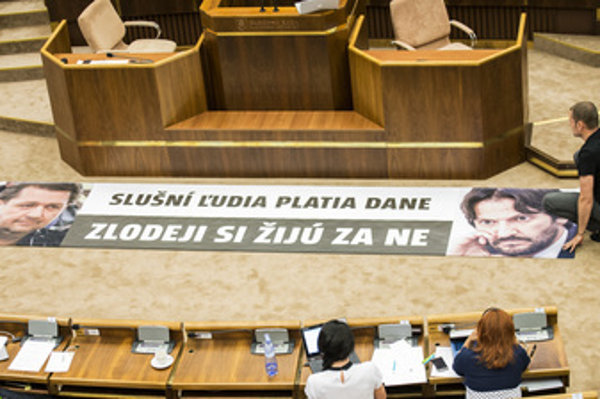 Freedom and Solidarity (SaS) and Ordinary People-Independent Personalities/NOVA (OĽaNO-NOVA) submitted the motion on July 1. The Speaker of Parliament, Andrej Danko (Slovak National Party-SNS) then had seven days to convene an extraordinary parliamentary session which he set for Wednesday July 6.

The opposition wants to dismiss Fico due to his failure to sack Interior Minister Robert Kaliňák over his alleged involvement in the Bašternák tax fraud case. OĽaNO-NOVA leader Igor Matovič claims that Fico has thus taken responsibility for Kaliňák and therefore supports the criminal activities of government members and a corrupt political environment.

“His behaviour threatens Slovakia’s interests and its good reputation, undermines people’s trust and democratic institutions and provides scope for extremist movements. The premier has failed with respect to the Bašternák case and he needs to accept responsibility for his idleness,” said OĽaNO-NOVA MP Veronika Remišová.

Matovič noted that the opposition has repeatedly appealed to Fico to dismiss Kaliňák from his post and for him to move out of a flat in the Bonaparte residential complex in Bratislava that he rents from businessman Ladislav Bašternák.

“Our call for justice hasn’t been heard and now we have to submit a motion for Fico’s dismissal from the post of prime minister,” Matovič said, as quoted by the TASR newswire. “The fact that he keeps downplaying the whole Bašternák tax fraud case is shameful,” he said, adding that he regrets that the opposition had to submit the motion on the very day on which Slovakia assumed the Presidency of the Council of the EU.

SaS MP Jozef Rajtár noted that tackling tax fraud is one of the stated aims of the presidency. “Fico’s cabinet has obviously interpreted this agenda as showcasing how this tax fraud is carried out for our European partners,” Rajtár said.

Another SaS MP Ľubomír Galko again called on the other coalition parties – SNS, Most-Híd and Sieť – to facilitate Kaliňák’s sacking, as they are the ones that have the power to do so.

Opposition MPs will attempt to dismiss Fico at an extraordinary session on July 6 at 10:00, Danko confirmed, adding that a second attempt to dismiss Kaliňák,  suspended on June 30, will follow on the very same day. Danko added that he decided to arrange the votes in this manner with the efficient functioning of Parliament in mind. He noted that if the Opposition initiates another session, he would convene it at the Incheba exhibition centre in Bratislava because the parliamentary premises will be fully occupied with events related to Slovakia’s Presidency of the Council of the EU in the next few days.

Danko wondered out loud when legislators will stop arguing and being divisive in this manner. “Premier Fico isn’t negotiating with [European Commission President Jean-Claude] Juncker only on behalf of Smer voters but on behalf of all of us,” he noted. “This isn’t how politics is done, and I very much regret where our parliamentary politics has got to.”

The Thursday June 30 session of parliament which should have included the no-confidence vote on Kaliňák was interrupted. Matovič brought a banner to the House showing photos of Kaliňák and Bašternák and the slogan “Decent people pay taxes, and thieves live from them”.  Speaker Danko called on Matovič repeatedly to take the banner away, and noted that Kaliňák had not given his consent for the use of his photo, the Sme daily wrote. He deemed the “illegal banner” a barrier to the continuation of the parliamentary session and left some time for Matovič to remove it. The OĽaNO-NOVA chair did not do this and  Danko then interrupted the session. The incident spurred debates on the procedural rules of  parliament and on their potential amendment.