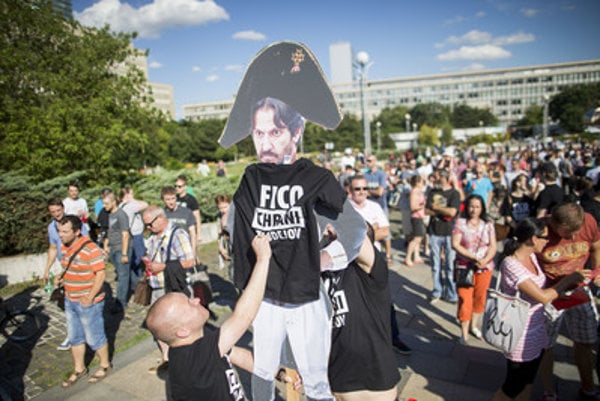 As organisers of July 4 protests calling on Interior Minister Robert Kaliňák to resign looked at Freedom Square in Bratislava, they worried that the issue will not be interesting enough for people to come. It would be difficult to stand in the heat and square does not provide much shade. Moreover, the summer season just begun and many people left capital for vacation.

“When my buddies and started to build the podium at 16:00 we were thinking whether this was the right day,” Ordinary People and Independent Personalities (OĽaNO) MP Jozef Viskupič said at the beginning of his speech.

Some 2,000 to 3,000 people were listening to him which means that protest still lacks mass appeal, but that the numbers did not fall in comparison with previous protest on June 26. Moreover, the opposition for the first time organised simultaneous protest in Košice which drew a similar number of people.

The protests were organised for a third Monday in a row by Opposition parties OĽaNO and Freedom and Solidarity (SaS), and they are pushing for Interior Minister Robert Kaliňák to resign for allegedly covering up tax fraud involving businessman Ladislav Bašternák. They also want to Prime Minister Robert Fico to resign for covering Kaliňák’s role in this case. The first protest was held on June 20 in front of the Bonaparte apartment complex where Fico lives.

“I have to admit that I’m surprised by those numbers,” Focus polling agency head Martin Slosiarik told The Slovak Spectator.

New disclosures in the Bašternák case have helped keep the protest numbers strong. The confessed links between Kaliňák and Bašternák motivate people to attend, according to political marketer Radovan Choleva. He added that opposition parties also managed to sell their protests to people.

“From marketing point of view protests are of high professional level,” Choleva told The Slovak Spectator. “Organisers are experienced and they are learning of their previous protests.”

Read also:Kaliňák’s scandal has not harmed Smer Read more
Sorry, you have just exceeded the allowed number of devices
This subscription grants access to the locked content of Spectator.sk and SME.sk for only one person through a maximum of three different devices or browsers.
To continue reading the article on this device, please update the list of devices in the profile settings.
Administer devices
You can read everything about device settings here.