Government's first 100 days in office: No concrete changes yet

Only few governments have had such a variety of difficulties to deal with during their first hundred days in office as the third government of Robert Fico. 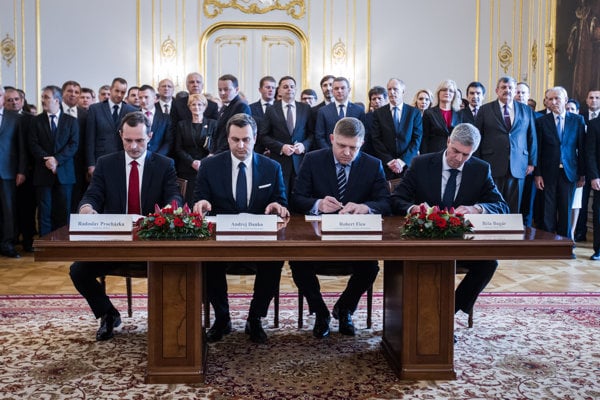 No-confidence votes, street protests, final preparations for Slovakia’s first-ever EU Council presidency, and the prime minister operated on. Only few governments have had such a variety of difficulties to deal with during their first hundred days in office as the third government of Robert Fico.

The coalition parties Smer, Slovak National Party (SNS), Most-Híd, and Sieť together control 81 MPs in the parliament of 150. Originally there were three more MPs from Sieť and one more from Most-Híd, who however left over disagreement with their parties’ joining the ruling coalition in its present composition.

The very way the cabinet emerged could be perceived as problematic. Most-Híd and Sieť joined Smer and SNS to form the ruling coalition. They provoked remorse among some of their voters, and to some extent also surprise among observers. None of the parties that have in the past profiled themselves as opposition to Smer have actually gone and joined Smer in government – until now.

This has had fatal consequences for the junior coalition party Sieť of Radoslav Procházka, which has lost three of its MPs and a large portion of its membership over disagreement with joining the Smer-led government. Even the remaining leaders of the party have experienced discord and by the time the 100 days of the government have passed on July 1, Procházka has lost both his closest collaborators, Miroslav Beblavý and Andrej Hrnčiar (in two separate developments). Observers of the local political scene deem the party practically dead now. 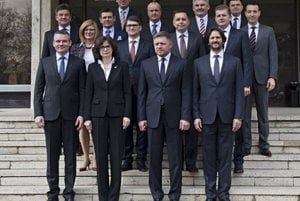 The start of the government’s term was marked by the alarming health condition of Prime Minister Robert Fico, who actually had heart surgery shortly after the government was formed. Only days from his surgery, also the parliament’s speaker and head of junior ruling SNS, Andrej Danko, underwent surgery at the oncologic institute too.

And finally, one of the government’s key ministers, Interior Minister Robert Kaliňák, has faced accusations of being linked to a major VAT fraud scandal.