We cannot pretend that the life of the country now stops for six months and suddenly we will forget our shortcomings and act like an exemplary democracy that has no problems whatsoever. 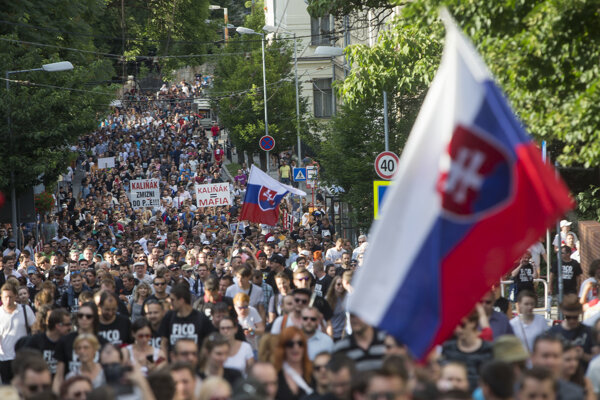 Let us work, don’t ruin our presidency, don’t destroy Slovakia’s image, they say – as if the image of the country was any more fragile just because EU politicians will visit from time to time.

After its first 100 days in office, which the new government wrapped up on July 1, the same day that it took over the EU Council presidency, observers of the local political scene agree its performance is unconvincing and that time has been wasted “trying to defend the indefensible”.

Now there is the presidency, and government politicians embraced it even before it started as a universal excuse to fight off any ugly disputes arising on the political scene at home. It might even sound reasonable in a way, that we need to forget the problems of one little nation to be able to work toward the good of the whole continent.

But the presidency cannot be an excuse for everything. Not even after the Brexit vote.

We cannot pretend that the life of the country now stops for six months and suddenly we will forget our shortcomings and act like an exemplary democracy that has no problems whatsoever.

This makes us no different than a fighting couple who might feel that divorce is looming but when they have a family get-together to go to, they play the ideal family in front of their relatives. That couple might be smiling, but their children know all too well that celebrations with family are not daily life, and that hours of madness will follow for every minute of fake smiles.

The state cannot work like that. It cannot work well for its citizens if they agree to be those little kids who fear the end of the party but they will still happily tell their aunts and uncles about the great plans their family has for the summer.

There are some who say that after the British vote that turned European politics upside down, protests against one interior minister and his murky acquaintances are just petty concerns and should be put aside while the EU’s presiding country focuses on other, bigger things. Those concerns indeed do look petty in the light of a challenge like Brexit, but their causes and consequences are very much linked with those for the British vote. If the British referendum results showed anything, it is the strong support that extremists and anti-system forces enjoy in the UK and beyond.

Talking about making the EU better and more understandable has become fashionable recently, but there are problems that cannot be solved on the EU level. Corruption, tax fraud, and other crimes that decrease trust and increase the insecurity among citizens still fall under the competencies of the member states.

It is on the national level where we need to strive for a change, to clean up the reasons why citizens think that the system we live in is rotten, doomed to failure, and simply wrong.

The Brexit cannot overshadow the fact that every country has its own problems. And Slovakia’s main problem at the moment appears to be national. Slovak politicians are unable to explain their behaviour, take the responsibility for it, and face the consequences.