Eighteen people, eight nights and one hundred and fifty tonnes of the sand were needed for the Festival of Sand. 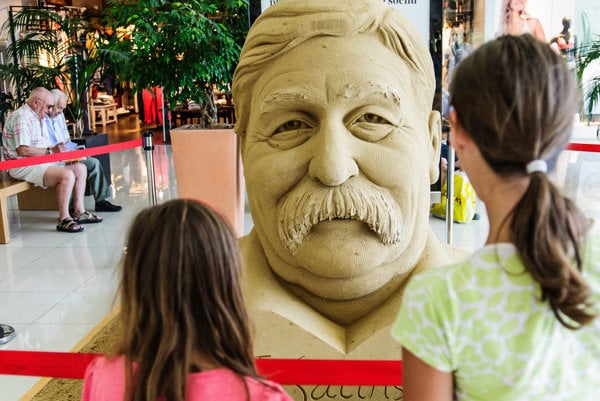 The third international festival of oversized sand sculptures opened in Nitra on the fifth of July and it takes place in the shopping center Gallery Mlyny. Visitors there can watch the sculptors during their work and also vote.

The six sand sculptors are not thematically restricted, thus creating according to their own ideas. The six art sculptures were made and some of them are still in process near the main entrance to the shopping center. Visitors can also vote by SMS to choose their “sand favorite” until the thirtieth of July. The remaining six non-competing sculptors on the topic of Slovak personality are in the passages on all three floors.

“To the build the sculptures we used approximately one hundred and fifty tonnes of sand,” said Ľuboš Trubíni from Gallery Mlyny for Nasanitra.sme.sk website.

They used dredged sand with a high percentage of clay from the mine in Marcelová. River sand is not very suitable for modeling, according to Trubíni.

“Carrying and placement of the sand in a hall was made by eighteen people during eight nights,” completed Dezider Meszároš for the Nasanitra.sme.sk website and added that the sand was transported by large lorries to supplying court and it was carried to the hall in boxes by pallet trucks. 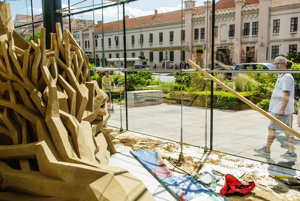 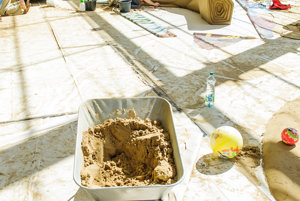 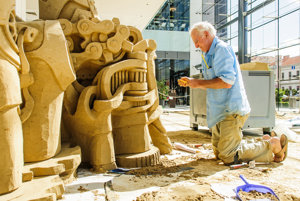 Two of them, Bosambo and Živný, were at two previous festivals. This time they are not only artists, but also technicians and designers.

The festival is a beautiful challenge for both of them, according to their words. As the water becomes increasingly rare in the world, Živný is making a sculpture in the form of drops of water and Bosamboˈs sculpture is his own statement about how institutions today are mapping people.