Slovak ministers heard by the EP

First ministers already heard, the others will follow through July 14. 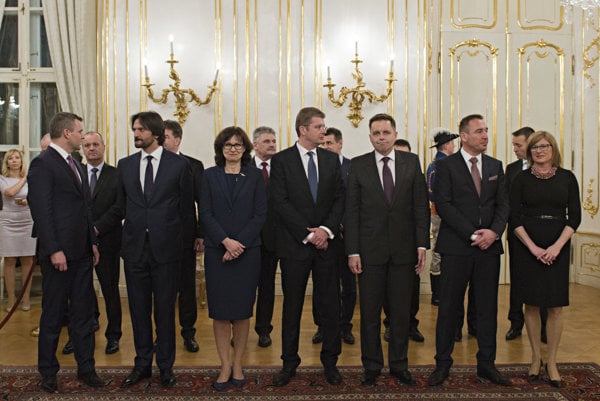 Members of the Slovak government began with the process of hearings in the European Parliament on July 11.

They will be heard by respective EP committees with regard to the programme priorities of Slovakia’s Presidency of the Council of the EU. The hearings will run until July 14, the TASR newswire reported.

A series of discussions with MEPs was started with Economy Minister Peter Žiga (Smer) and Transport Minister Roman Brecely (Sieť). They both appeared in front of the members of the Industry, Research and Energy Committee.

Also Foreign Minister Miroslav Lajčák (Smer nominee) will be heard by the Foreign Affairs Committee on July 12. On the same day Interior Minister Robert Kaliňák (Smer) and Justice Minister Lucia Žitňanská (Most-Híd) will deliver speeches at the Civil Liberties, Justice and Home Affairs Committee, while the latter will also face questions from the Legal Affairs Committee.

Health Minister Tomáš Drucker (Smer nominee) will speak with MEPs on July 12 and it will be at the Environment, Public Health and Food Safety Committee, TASR wrote.

Agriculture Minister Gabriela Matečná (nominee of the Slovak National Party) will speak twice in Brussels – first on July 12 at the Fisheries Committee and then on July 13 at the Agriculture and Rural Development Committee.

The Culture and Education Committee will hear Education Minister Peter Plavčan (SNS nominee) and Culture Minister Marek Maďarič (Smer) on July 13, while the former will also speak at the Committee on Industry, Research and Energy.

The series of hearings will be concluded by Deputy PM for Investments Peter Pellegrini (Smer), who will speak on July 13 at the Regional Development Committee and on July 14 at the Committee on Internal Market and Consumer Protection.

Hearings last between 60-90 minutes and they form part of the obligations of the member states presiding over the EU Council.