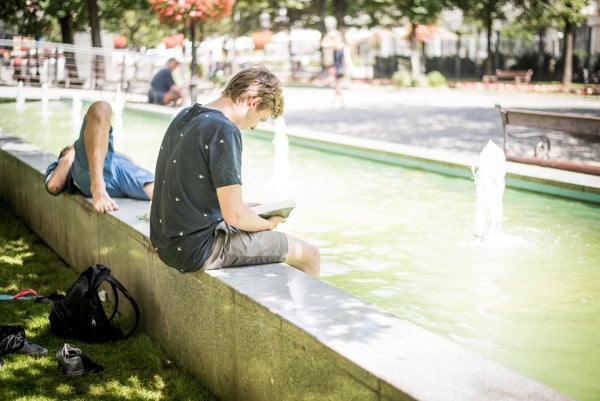 The third round of heat waves this year in Slovakia is forecast to culminate on July 12, the Slovak Hydrometeorological Institute (SHMÚ) informed. It also issued a second-level heat alert for that day, the TASR newswire reported.

The second-level alert applies to most of Slovakia, except Žilina Region and the High Tatras mountain range. In southern Slovakia, the hottest region of the country, the mercury is expected to climb to 35-36 degrees Celsius.

SHMÚ issued also a first-degree storm alert for western Slovakia. In the days following July 12, the weather is expected to cool down significantly, TASR wrote.

Meanwhile, 98 people have collapsed due to the extremely hot weather, according to the rescue service statistics published on the evening of July 11. The most cases were reported in Prešov Region, while the fewest were in Bratislava Region, informed Boris Chmel, the spokesperson for the Emergency Medical Service.

To reduce the risk of collapses, the city of Bratislava placed a water tank on the Main Square and Poštová Street, which people will be allowed to use on July 12 between 10:00 and 18:00 and then at days when the day-time temperature will exceed 30 degrees Celsius, TASR wrote.

Except for them, there are several drinking water fountains in the city centre, for example at Panská Street, Hviezdoslavovo Square, Župné Square, SNP Square, Main Square, in Čitáreň u Červeného Raka, or at the courtyard of the Primate’s Palace.

Firefighters have also warned of the increased risk of fires, especially outdoors. They recommend not using open fire sources, like cigarettes, matches, and lighters, not starting fires in nature during extremely dry and windy weather, not leaving the fire or grill without supervision and to extinguish the fire before leaving, the SITA newswire reported.