European stars on “the Blue Danube”

Among the impressive environment on a Danube island near Bratislava, an exhibition suggests an answer to what Joan Miró and the CoBra artistic movement have in common. 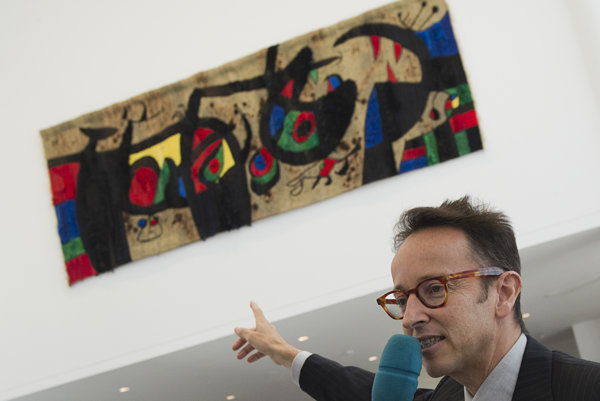 The opening of the exhibition called European Stars Miró & Cobra coincided with the start of Slovakia’s presidency of the Council of the EU, and thus it received even more high-profile guests and attention: apart from various local and foreign politicians, also Dutch Princess Beatrix visited the Danubiana Meulensteen Art Museum. 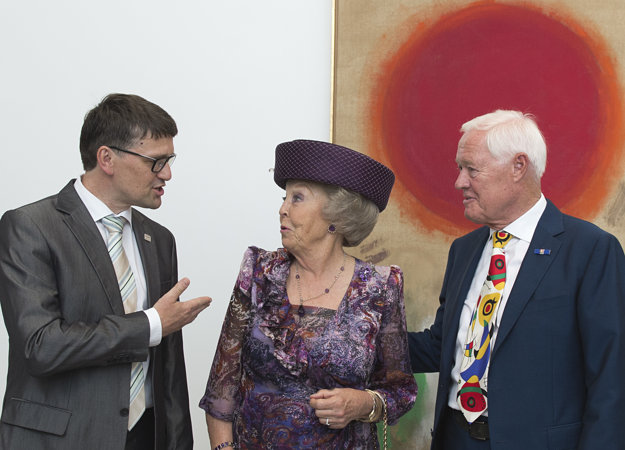 The very site itself symbolises the connection between The Netherlands and Slovakia, as its founder – who also contributed financially to this specific exhibition – Gerard H. Meulensteen, is Dutch; but he decided to present his collection, as well as works of other artists, at a water-lined venue close to the Slovak capital.

Many members of the CoBra movement (which is an acronym for Copenhagen, Brussels and Amsterdam) were Dutch, indeed. This, as well as the takeover of the presidency from the Netherlands to Slovakia, creates a logical and attractive framework for the event, head of Danubiana Vincent Polakovič said at a press breifing.

A few days before the opening, art historian and grandson of Spanish surrealist Miró, Joan Punyet Miró, visited the exhibition in person and explained the works, as well as their selection and the selection of this location to journalists. 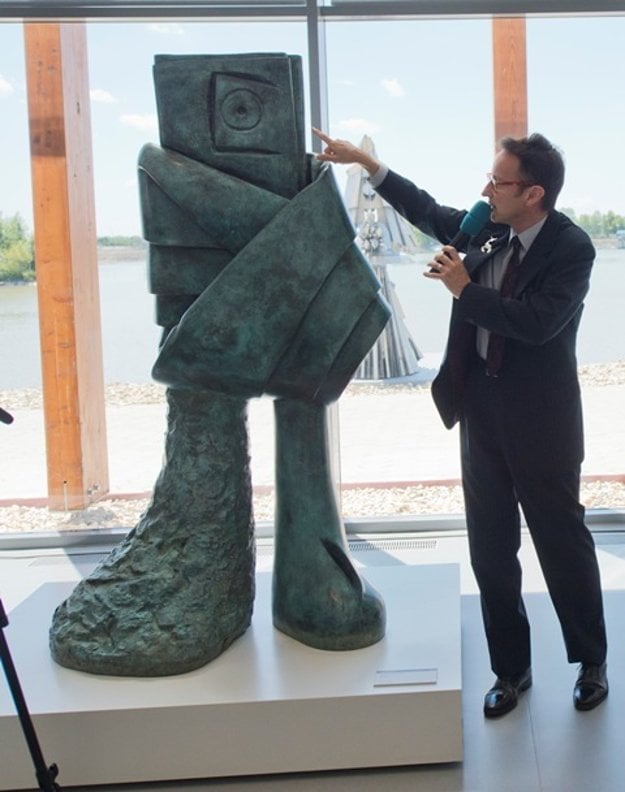 He said that the exhibition which includes 37 works of his grandfather mostly from the 1970s and 1980s was put together with the aim to show the influence Miró had on CoBra; and to confront the inspiration, philosophical essence and artistic language of artists who were close in the intellectual sense despite belonging to different generations. Miró Junior also stressed the peace-invoking role of art and added that he was in Danubiana to defend his grandfather’s vision of a “united Europe“. (On his way to Slovakia, he happened to be at the Istanbul airport – only a few hours before the deadly attack which killed dozens of people. Luckily, this time neither him, nor any of the works were harmed, unlike the 9-11 attack in which a big tapestry of Joan Miró Sr was destroyed.) 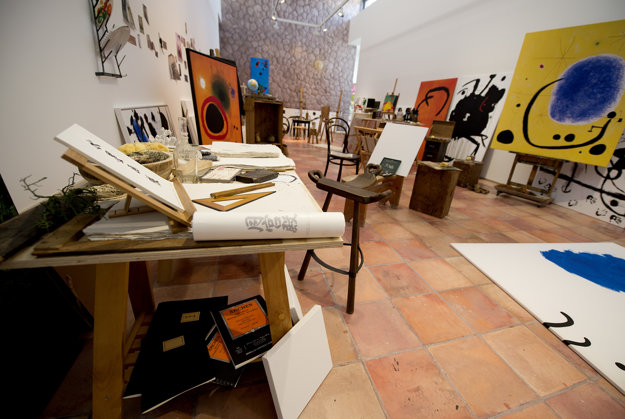 Apart from enlightening the artwork of his grandfather, he also explained his inspiration: rather than rational mind, or intellectual ideas, it was dreams, the deep unconscious as described by Sigmund Freud. Thus this has made Miró a visionary, and a pioneer of surrealism. He also used innovative and unusual materials, e.g. napkins from restaurants. At first his works were not very well-accepted and he found appreciation only later, as also outlined by art historian Miró in a story of his father who shocked his manager with an object made of napkins. “Wait 35 years, and then you will be able to sell it,” he allegedly said, clearly foreseeing the future of his creations. 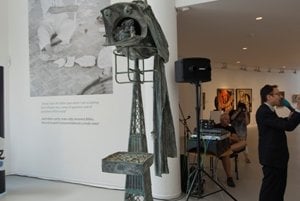 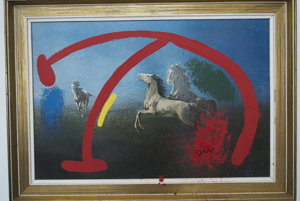 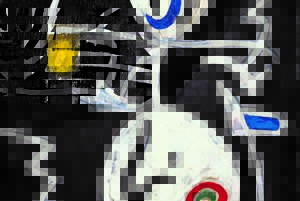 Joan Miró Jr. also showed the work he likes most – his grandfather completed it after he turned 80 and was close “to the other side”. When asked whether he does not fear the emptiness and the void, he uttered he just feared he would repeat himself.

Curator of the exhibition, Kurt van Twist, said for the Slovak Radio that there are many things Miró and CoBra had in common – apart from sources, and nature or surrounding environment, it was also materials they used.

Els Ottenhof, head of the CoBra Museum of Modern Art in the Dutch town of Amstelveen, explained the importance of the international group that existed only for a brief period of time (between 1948 and 1951) and had only two joint exhibitions; but which influenced with their progressive creations the art of the whole second half of the 20th century. This exhibition originally took place last year in Amstelveen, and after Ottenhof and Miró Jr. visited Danubiana, they agreed to present it also here. 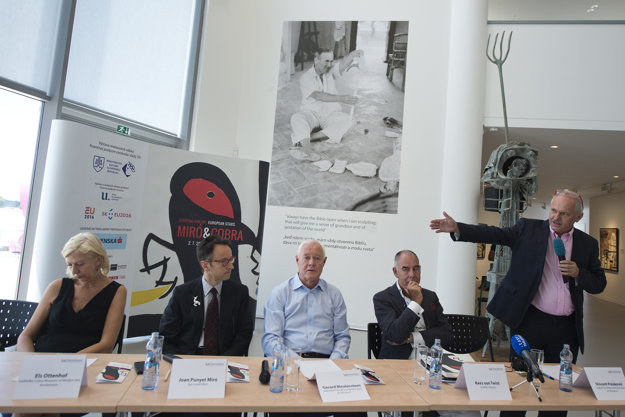 “The base of Danubiana is a collection which re-defines mindset and fits very well with European avant-garde,” Ottenhof opined. “European avant-garde was very important, and CoBra was its crucial part in the period after World War II, changing from secretive art to action art.” She added that the transition made the field open to all contemporary art.

The rebelling group members tried to find a new visual language, albeit in various directions and styles. Apart from visual art-work (Ager Jorn, Karel Appel, Constant and many others), its members and followers also wrote prose and poetry. Their sources of inspiration included children’s drawings, art brut, primitivism, surrealism and especially the dream works of Joan Miró. In their second and last exhibition, in 1951 in Liége, Miró exhibited two of his works. 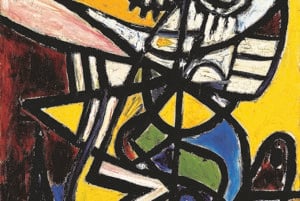 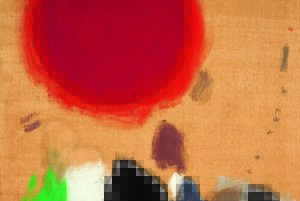 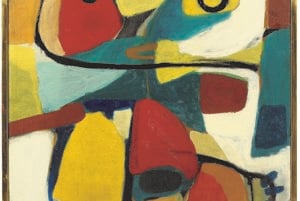 The current exhibition in Danubiana presents more than 60 of their works, and apart from Miró’s artworks, it also shows a replica of his studio in Mallorca; there is also a bilingual Slovak-English catalogue of 330 pages available. It can be visited daily except for Mondays, until November 13. At weekends a boat trip from Bratislava can enhance the experience. More detailed information can be found at www.danubiana.sk.