The minister however, talked about other topics.

For the first time ever, Interior Minister Robert Kaliňák was reminded about his relation to businessman Ladislav Bašternák, who is suspected of tax fraud, in the European Parliament, the Denník N daily reported. He was invited to answer the questions of MEPs in the Civil Liberties, Justice and Home Affairs Committee, with regard to the programme priorities of Slovakia’s Presidency of the Council of the EU.

“Ladislav Bašternák transferred money to your accounts, and is now investigated by the police,” said French MEP Eva Joly, member of the Group of the Greens, as quoted by Denník N. “How can we believe the investigation will be independent when you serve as the interior minister?”

She even indirectly told him it would be better if he resigned. People do not believe politicians and the corruption scandals even lower this trust, she added.

“Mr Kaliňák, please, take responsibility and prove that you can serve as an example in order not to limit the fight against corruption to nice words,” Joly said, as quoted by Denník N. 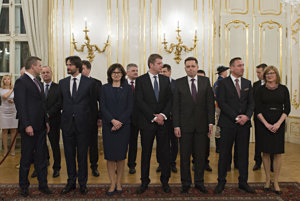 She was supported by Portuguese social-democratic MEP Ana Maria Gomes who said in her speech that corruption is a big problem in Slovakia.

“Slovaks have the impression the corruption is immune from prosecution,” Gomes said, as quoted by Denník N. “What do you want to do with it?”

I cannot comment on some “personal attacks”, responded Kaliňák.

“Not the Interior Ministry, but the prosecutor’s office, which is independent, supervises investigations in Slovakia,” the minister added, as quoted by Denník N. “The other things are untrue, but we will not waste time with it.”

He rather talked about refugees, stricter laws on weapons and other priorities of Slovakia’s presidency, Denník N wrote.

Slovak MEP Monika Flašíková-Beňová defended her party colleague, though she has recently called on him to leave, according to the daily.