The 11-kilometre section of the D1 highway may be finished in October 2018. 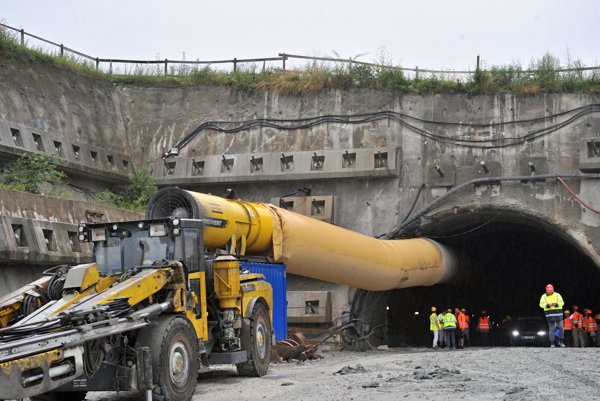 The construction of the Hričovské Podhradie – Lietavská Lúčka stretch, an 11-kilometre section of the cross-country D1 highway near Žilina, will take nine months longer than originally expected.

It was expected to be completed in January 2018, but after the construction firm Doprastav applied the option to postpone the deadline, the road will be finished in October 2018.

“The construction works at the Ovčiarsko tunnel are on time, but there are more problems in the Žilina tunnel,” said Róbert Auxt, head of the National Highway Company (NDS), as quoted by the SITA newswire.

Among the main reasons are frequent landslides which require the implementation of various technologies which slow down the construction work.

“In case the geological conditions improve, the drilling may be much quicker,” Auxt added, as quoted by SITA.

The construction site was visited also by Prime Minister Robert Fico, who reminded in his speech that the road is built also thanks to the EU funds. Also this proves how beneficial the EU membership is for Slovakia, Fico said, as reported by SITA.

The D1 stretch near Žilina is built by a consortium of companies composed of Doprastav, Strabag, Váhostav – SK, and Metrostav which pledged to complete it for €427.2 million excluding VAT. It signed an agreement with NDS in December 2013, with the start of the construction scheduled for January 2014. The first phase was financed from the Operational Programme Transport (prepared for the 2007-2013 programming period), while the rest is from the Operational Programme Integrated Infrastructure (2014-2020 programming period), SITA wrote.

The section contains 11 bridges and two tunnels: Ovčiarsko (2,367 metres) and Žilina (687 metres). The road connects to the Lietavská Lúčka – Dubná Skala stretch (13.5 kilometres long), part of which is also the Višňové tunnel with a total length of 7.5 kilometres. The section is currently under construction, with completion scheduled for 2019. The construction works are carried out by Italian-Slovak group Salini Imregilo and Dúha for €409.8 million excluding VAT, SITA reported.