This took place at an informal meeting of European Union energy ministers in Bratislava on July 13. “We signed a contract between Eustream and Bulgartransgas concerning the Eastring project at the gas company level in early June,” Žiga said, as quoted by the TASR newswire. “Now we’ve signed at the inter-governmental level. I believe that the Eastring project will facilitate the setting up of EU Energy Union via the diversification of gas routes and of gas sources.”

Žiga said that a full deal still lacks the signatures of two partner countries – Hungary and Romania – through which the pipeline should pass. “We believe that we’ll be able to strike a similar agreement with these countries in the foreseeable future, whether at the corporate or inter-governmental level,” he added.

“Slovakia is gradually attempting to sign these memorandums of understanding with all gas transit countries,” European Commission Vice-chair for Energy Union Maroš Šefčovič said. “There will still be some negotiations with Romania and Hungary.”

The dual direction Eastring pipeline is a joint project of Slovakia, Romania, Bulgaria and Hungary with a planned capacity hovering at around 20-40 billion cubic metres of gas per year. Slovakia has been pushing for the implementation of the Eastring project over the long term, arguing that it should contribute towards energy security and the diversification of gas supplies to Europe. The project should involve gas from the Caspian region, with a corridor prepared for transporting the commodity from south-eastern Europe to western Europe. This should significantly contribute towards integrating gas markets. 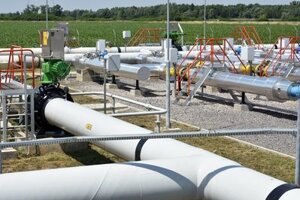