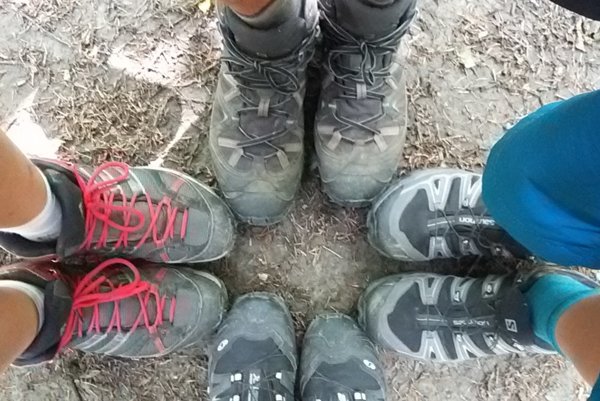 Ever since first arriving in Slovakia in 1994 I had had recurring dreams of walking across the whole of the country, Devín to Dukla. Then, young(ish), fit(tish) with lots of time: it would have been easy, too easy. So we waited and waited, until we weren’t so young(ish), weren’t so fit(tish) with two kids (ages – 12 and 14) to actually attempt it. The best time.

I say ‘attempt’ because apart from death nothing would have actually stopped us. Not that we had the time to do it in one go – but hey Rome wasn’t built in one go. Not that we did it in one year. We will do the last bit, Chopok to Dukla in 2016.

We had the maps – we were prepared.

We had all heard of people who had done it, sleeping in tents, in bus stops or simply under the stars with the pigs and the bears. However, you may be relieved to hear, we are not so hard core. We didn’t carry tents, sleeping bags or any cooking equipment. We travelled as light as we could. We would all smell the same so none of us would mind, “sorry” everyone else. We slept every night in some kind of man made structure; hotels, hostels, B&Bs but generally without the second B, with friends and in mountain huts. We ate lunch al fresco, or in bus stops to avoid the rain and lightning, and dinner in restaurants. All very civilised, well mostly all very civilised.

What I am trying to say is that the walk can be done by normal people, not carrying the world on their backs and in a vaguely civilized manner. With a little bit of effort anyone who can walk for a day can do the walk (the “E8”). To quote my son (12) “… walking is good, you get tired every day but have the night to recover.” 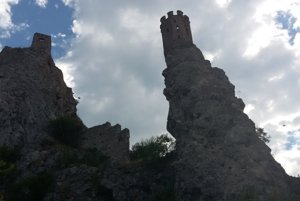 The route is generally easy to follow, most of the time we didn’t even need the maps we carried. That’s not to say that, sometimes, we didn’t take scenic diversions that were not strictly on the route but we were never truly, utterly lost. Or I suppose I should say that we were never aware that we were truly and utterly not where we thought we were.

Oh, one last thing before we go. We were warned of bears and wild pigs. In the first twenty days of walking we have seen a few wild deer, a few birds but no bears or pigs. We passed a hunting reserve and saw herds of deer, mouflon and pigs but that doesn’t count – but they were pretty. As for bears – just one bare hiker and he wasn’t so wild or pretty.

General Comments
At the moment it’s just a plan.
We have the basic equipment. Basic knowledge.
And a will. But only one between the four of us.