Deputy speaker Hrnčiar (a Sieť nominee) presented his authority to preside over the parliamentary session by documents arguably signed by Parliamentary Chair Danko. 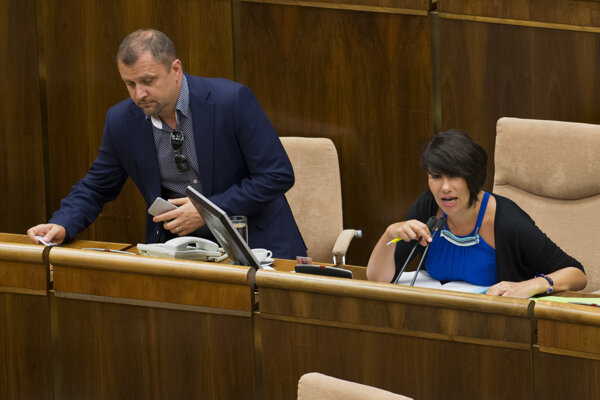 Deputy speakers (L) and Ďuriš Nicholsonová argue over who shall preside over the parliamentary session on July 7. (Source: TASR)
Font size:A-|A+

Opposition MPs from the Ordinary People and Independent Personalities-NOVA party (OĽaNO-NOVA) filed criminal charges with the General Prosecutor's office on July 14th against the Parliamentary Chair, Andrej Danko, for an allegedly falsified signature.

According to Lipšic, at least two handwriting experts confirmed that the signature belongs to another person.

“It is not difficult to verify whether this was an original or a fake signature from the quantity of original signatures of Andrej Danko,” said Lipšic, as quoted by SITA, adding that the sentence in this case could be four to ten years.

Lipšic believes that the Slovak Parliament will unite over this issue, that the proper evidence was not destroyed and that law enforcement authorities will find who was involved in this criminal offence. Remišová added that if the signature is a fake, Danko should immediately take responsibility.

The issue of the false signature arose after an extraordinary parliamentary session, during which Andrej Danko flew to the European Parliament. Deputy speaker Lucia Ďuriš Nicholsonová opened the session under the assumption that at least 76 MPs were present. However, Hrnčiar claimed that only he had a mandate to lead the session and substitute for Andrej Danko during his absence. He justified his words with a document bearing the allegedly false signature of the parliamentary chair, SITA reported.

After the beginning of the session, Hrnčiar asked for a vote on a procedural proposal which called for another vote to determine whether the parliament had a quorum. When the vote ended, he stated that the parliament lacked a quorum and then suspended the session.

The same day, Hrnčiar posted the signed document from the session and the coalition deal for comparison on his Facebook page, however, he removed them immediately after criticism by the opposition party Freedom and Solidarity (SaS), the Denník N daily wrote.