The attack will resonate for the next several months, PM Fico says. No Slovaks reported among the victims as of Friday morning. 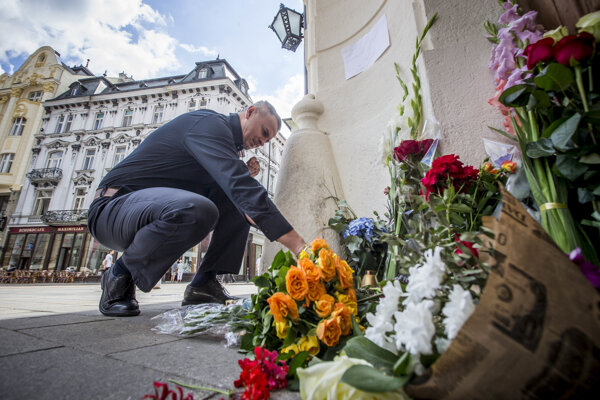 In front of the French Embassy in Bratislava (Source: SME)
Font size:A-|A+

Slovak officials condemned the terror attack in Nice on July 14 which killed at least 84 people and left dozens more injured, thus becoming one of the worst terrorist attacks in Europe in the past 15 years.

The Foreign Affairs Ministry so far does not know about any Slovaks among the victims or the injured, Igor Skoček of the press department told the TASR newswire. Though not all victims have been identified yet, he said he hopes no Slovaks will be among them.

Prime Minister Robert Fico, who was attending the ASEM summit in Mongolia at the time of the incident, expressed his condolences to the bereaved.

“I am sorry for all the victims and all those injured in this repulsive terrorist attack,” Fico said and expressed his solidarity with the French. 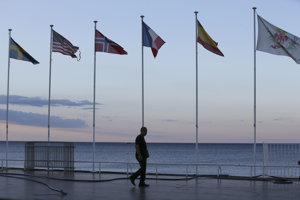 Fico said that he had been in contact with the Slovak Embassy in France and with the Slovak security forces and the secret service since the attack occurred, the Sme daily reported. Slovakia will take measures that are usually put in place following similar attacks, he said.

“It is an event that will resonate for several months not only in Europe but also in the whole world, because attacks occur in every part of the world,” Fico said.

“I’ve been deeply shaken by yesterday’s attack in Nice,” President Andrej Kiska wrote in a telegram of condolence, sent to his French counterpart Francois Hollande. “It is a cold-blooded, barbarian act which abused the celebrations of a national holiday to cause the death and suffering of many innocent people. Terrorism is an evil we all have to unite against.”

The Speaker of Parliament, Andrej Danko, wrote on Facebook that his thoughts and prayers are with the families of the bereaved who lost their children, mothers and fathers.

The Interior Ministry has meanwhile condemned the terrorist attacks in France, stressing that the Slovak security forces are monitoring the current situation and are in communication with their foreign partners.

“Slovakia has applied enhanced security measures, which focus on places where many people gather and on strategic objects, for a long time,” Interior Ministry spokesperson Andrea Dobiášová stated in a press release.

Slovakia is sending a special plane to Nice to bring home citizens who wish to return to their country following the attack, Interior Minister Robert Kaliňák informed after an extraordinary meeting of the Security Council that convened today in reaction to the atrocity.

The plane will arrive in Nice on the morning of July 16th and will take on board all Slovak citizens who are interested in returning home. Those who want to use the service should call the number that has been specially set up by the Foreign Ministry +421259785978. So far, the authorities are aware of 17 people who want to fly back, according to Kaliňák.

Slovakia was expected to go to the standard level security alert, but the Security Council has decided to keep it at level two, the Sme daily reported. Kaliňák told the press that there are already thousands of police officers in the streets, many more than usual, due to the EU Council Presidency and the police corps do not really have the capacity to send out more.

The Foreign Ministry condemned the attack and noted that as the presiding country of the EU Slovakia is ready to continue fighting terrorism as a global threat.

Foreign Minister Miroslav Lajčák, who condemned the attack earlier this morning on his Twitter account, sent a letter of condolence to his French counterpart, Jean-Marc Ayrault.