A sentence for forgery?

In this very old postcard from 1902, the vista of the Upper Liptov-region town of Hybe can be seen. Both signs that are visible – Kriván and Hibbe – reveal something about history. 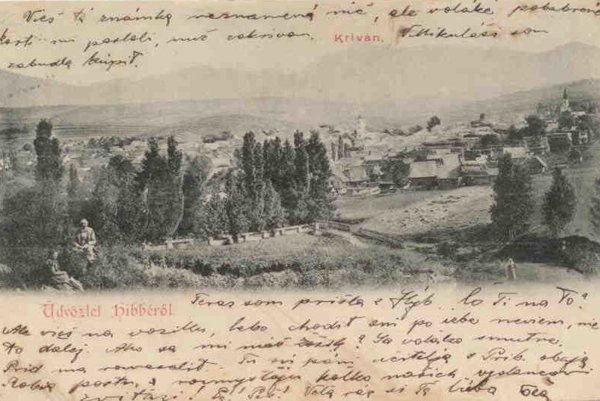 The popular peak of Kriváň has always been in the visual field of Hybe burghers, as the town territory was bordering on one side of this mountain. Also, the hopes of local miners were focused on the hill, as they tried to extract precious stones from the depths of the earth.

The name Hibbe sounds strange at first: it emerged as a combined name of two settlements that used to lie in the valley of the small Hybice river, Malá (Small) Hyba and Veľká (Big) Hyba. The name of the river reveals its instability as it is derived from the verb hýbať sa, to move, or hybký, nimble. The river may have been unpredictable and it may also have often changed its course.

The two ‘b’s in the name of the town come from the Middle Ages and is probably traceable to German colonists. Over time the Slovak part of the population adopted it and when Hungarian authorities tried to introduce spelling with just one B in the 19th century, they met with tough opposition. The postcard indicates how the conflict concerning the name ended.

Hybe inhabitants experienced tougher fights than just concerning the spelling, though. It was a free royal town with privileges but it did not have as many freedoms and rights as may seem from its status. Thus, the burghers looked for help and tried everything, including the lie of forgering the town’s privilehge. It was, however, almost common practice in the Middle Ages.

Hybans hid the original document and started claiming the territory of today’s villages and municipalities of Dovalov, Kokava, Východná and part of the territory of Liptovský Hrádok. In the end though, the whole forgery was in vain as the originally unimportant Hrádok dominion grew to quite an important one, with a massive castle and reckless owners. Instead of expanding their territory, the Hybe locals eventually had to defend themselves from the ever more aggressive requests from the lords from Liptovský Hrádok.

The clash between the town and the castle culminated under the Paczoth family, who were reckless lords of Hrádok, when 200 lords’ beadles raided Hybe. Part of Hybans barricaded themselves in the church, another part fought behind the cemetery walls. The result was five dead locals but it could have been worse: the beadles were going to burn the town but refrained only due to the plea of the local priest, Isaiah Lutz. Such a devastating attack was not repeated but Hybans have known since then that rather inventing new territorial claims, they needed to focus more on protecting their independence.